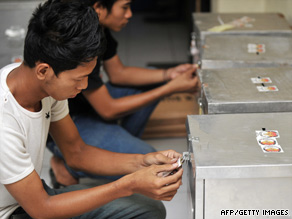 Volunteers in Jakarta seal ballot boxes before officials send them to voting stations.

With 18.7 million ballots counted, the incumbent held about 61.7 percent of the vote, compared with 28.6 percent for former President Megawati Sukarnoputri and 9.8 percent for Yudhoyono's vice president, Yusuf Kalla.

Official results will come out by the end of July, or early next month, according to the commission. Indonesia has 175 million registered voters spread over 17,000 islands.

It was the country's second direct election since the end of the authoritarian regime of dictator Suharto in 1998.

Analysts and polls, ahead of the election, predicted Yudhoyono -- benefiting from the country's strong economy -- would win a second term. In 2004, Yudhoyono defeated then-incumbent Megawati in a runoff election.

Yudhoyono's Democratic Party was the only single party to get enough votes in April's legislative elections to nominate a candidate on its own. Kalla's Golkar Party came in second and Megawati's Indonesian Democratic Party of Struggle, or PDI-P, placed third.

Kalla and Megawati had to form coalitions with other parties to run for president. Kalla had hoped voters would give him some credit for Indonesia's economic successes, which occurred under his term as vice president.

Yudhoyono is known as "Mr. Clean" because of his anti-corruption efforts. He also gained popularity for his handling of the 2004 tsunami recovery and the country's battle against terrorism.

Indonesia has had impressive economic growth over the past five years, though how much direct credit Yudhoyono can take for that is questionable. And despite Indonesia posting an average of 5.9 percent annual growth during his presidency, little of that has trickled down to the country's poor.

Yudhoyono's opponents say he is too liberal, is too skewed toward the west, and doesn't pay enough attention to the 40 million Indonesians living below the poverty line.

Still, the country is exhibiting surprising resilience in the face of the global economic downturn. Growth topped 6 percent last year, and Indonesia was the fastest-growing economy in southeast Asia in the first quarter of this year.