UNITED NATIONS (CNN) -- United Nations Secretary-General Ban Ki-moon warned Myanmar authorities that they must deliver on a "free and fair" election in 2010. 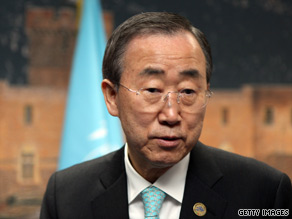 The statement came Monday as Ban briefed the U.N. Security Council about his recent trip to Myanmar. During the two-day trip earlier this month, the secretary-general met with authorities and asked them to immediately release all political prisoners, including pro-democracy leader Aung San Suu Kyi.

The U.N. Permanent Representative of Myanmar, U Than Swe, on Monday told the Security Council, "At the request of the secretary-general, the Myanmar government is processing to grant amnesty to prisoners on humanitarian grounds and with a view to enabling them to participate in the 2010 general elections."

But he offered no specifics beyond his statement.

During Ban's trip, Senior Gen. Than Shwe, the leader of the Myanmar's military junta, refused Ban a meeting with Suu Kyi, who has been held under house arrest for 13 of the past 19 years.

In remarks after his trip, Ban called not being allowed to meet with Suu Kyi "not only a deep disappointment but also a major lost opportunity for Myanmar."

Ban was able on his trip to meet with all 10 of the registered political parties.

In his remarks Monday, the secretary-general made three specific proposals for Myanmar to address: the release of all political prisoners, including Suu Kyi; the resumption of a substantive dialogue between the government and the opposition; and the creation of conditions for credible and legitimate elections.

"The world is now watching closely whether they (Myanmar's leaders) will choose to act in the best interest of their country or ignore our concerns and expectations and the needs of their people," Ban said.

Myanmar's U.N. envoy said his government "intends to implement all appropriate recommendations that the secretary-general had proposed."

Suu Kyi -- the face of Myanmar's pro-democracy movement -- is currently on trial on allegations of subversion. The 1991 Nobel Peace Prize winner and two of her maids have been charged in a May 3 incident in which an American, John William Yettaw, 53, swam across a lake to her house and stayed for at least a night.

Suu Kyi, 64, is accused of violating her house arrest by offering temporary shelter to Yettaw. But she has said she doesn't know Yettaw, didn't know of his plans, and didn't do anything wrong.

Her supporters say the arrest is meant to keep her confined so she cannot participate in the general elections that the junta has scheduled for next year.