(CNN) -- Myanmar's pro-democracy opposition party said Tuesday it was skeptical of the government's plan to grant amnesty to political prisoners, despite an announcement to the United Nations that it would do so. 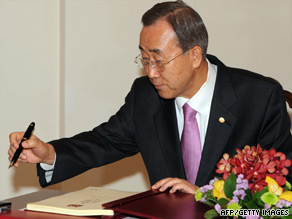 U.N. Secretary-General Ban Ki-moon has called for the release of all political prisoners in Myanmar.

Nyan Win, a spokesman for the National League for Democracy, told CNN that he was doubtful that many prisoners would be released. He said few prisoners were released in a past amnesty.

On Monday, the U.N. Permanent Representative of Myanmar U Than Swe told the Security Council the country planned to grant amnesty to prisoners.

"At the request of the secretary-general, the Myanmar government is processing to grant amnesty to prisoners on humanitarian grounds and with a view to enabling them to participate in the 2010 general elections," he said.

He offered no specifics beyond his statement.

In a briefing on the trip to the U.N. Security Council, Ban said Monday that he was disappointed that he was not allowed to meet with Suu Kyi, who has been held under house arrest for 13 of the past 19 years.

In addition to asking for the release of political prisoners, Ban said he had asked for the resumption of a substantive dialogue between the government and the opposition and the creation of conditions for credible and legitimate elections.

As of Tuesday, there were no details of the release on the Web site of Myanmar's English language state-run newspaper, the New Light of Myanmar.

Suu Kyi is currently on trial on allegations of subversion.

The 1991 Nobel Peace Prize winner and two of her maids have been charged in a May 3 incident in which an American swam across a lake to her house and stayed for at least a night.

She has said she doesn't know Yettaw and denies any wrongdoing.