JAKARTA, Indonesia (CNN) -- Indonesian authorities believe two suicide bombers checked into the JW Marriott Hotel in Jakarta and carried out coordinated bombings Friday morning, killing themselves and at least six victims and wounding more than 50 others. 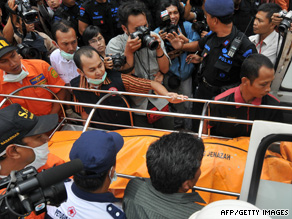 A body is removed following the blasts at the Ritz-Carlton and the nearby J.W. Marriott hotels in Jakarta on Friday.

It is unclear what group is behind the attacks on the Marriott and the adjacent Ritz-Carlton hotel, Indonesia's National Police Chief Gen. Bambang Hendarso said at a news conference. He warned that the death toll could rise.

The ministry identified two of the dead as Australian, one from New Zealand and one from Singapore. Another victim was Indonesian and the sixth remained unidentified.

Eight American nationals were among the wounded, according to the U.S. State Department.

Investigators are also analyzing closed-circuit television footage from the Marriott that shows a man, sporting a baseball cap and pulling a wheeled suitcase, heading toward the JW Marriott Hotel's lobby-level restaurant seconds before the deadly blast.

Five victims and one suicide bomber were killed at the Marriott, according to police spokesman Inspector General Nanan Soekarna.

Minutes later, another suicide bomber struck the adjacent Ritz-Carlton, killing one person and the bomber. Indonesian national police confirmed that the man seen in the CCTV video, distributed by Indonesian television, is being investigated in connection with the blast.

"We are suspecting the man in the footage because the time frame matches with the time of the bombing," national police spokesman Nanan Soekarma said. "It is obviously premature to confirm it right now as we will have to wait for the lab results and the investigation to conclude."

Indonesian authorities have detained several witnesses and others for questioning, and have sent forensic evidence from the scene for testing, a spokesman for Indonesian President Susilo Bambang Yudhoyono said.

"It's all being studied now," Dino Patti Djalal told CNN.

Yudhoyono warned that it is still too early to determine who was behind the attacks.

"This terrorist action is thought to be the work of a terrorist group, even though it is not certain whether this is the terrorism which we are familiar with up until now," the recently reelected president said.

The bombings at the two luxury hotels -- which are connected by an underground tunnel -- happened shortly before 8 a.m. (9 p.m. Thursday ET), first at the Marriott and then 10 minutes later at the Ritz-Carlton, police officials said.

Both blasts struck the hotels' restaurants and several prominent international business leaders were among the casualties.

An unexploded bomb was found on the Marriott Hotel's 18th floor where several suspects believed to be linked to the bombings were staying, Hendarso said.

Indonesian investigators believe the bombers checked into the Marriott on Wednesday and were scheduled to check out on Friday, he added.

It is unclear how they got around the "robust security" at the hotels, according to Alan Orlob, security chief for Marriott Hotels. Ritz-Carlton is a subsidiary of Marriott. Orlob said there had been no indication of any "immediate threat in Jakarta."

Security has been extremely high at the Marriott hotel in Jakarta since it was struck by a car bombing in August 2003 that killed 12 people.

Hendarso said the type of explosives found were similar to those found in a recent raid on a home in West Java that was linked to Noordin Top, a suspected leader of a small JI splinter group that espouses the use of large-scale terror attacks to push for the establishment of Islamic states in the region.

So far, there has been no claim of responsibility for the latest attack. Al Jazeera English reported that it was in touch with a JI member who denied any involvement in Friday's hotel bombings.

The fatalities include New Zealand national Timothy David McKay, 60, according to Indonesia's state-run Antara New Agency. McKay -- the CEO of Holcim Indonesia, a cement company -- was at the hotel for a breakfast meeting with fellow prominent business leaders, the Jakarta Post reported.

Indonesian media also reported that two directors of Freeport Indonesia, the largest copper and gold mining company in Indonesia, were wounded in the attacks on the two hotels.

English soccer team Manchester United canceled its trip to Indonesia after the bombing. It had been scheduled to check into the Ritz-Carlton on Sunday.

"The shocking part was entering the lobby, where the glass at the front of the hotel was all blown out and blood was spattered across the floor, but most people were leaving calmly," hotel guest Don Hammer said.

Greg Woolstencroft said he had just walked past the hotels to his nearby apartment when he heard an explosion.

"I looked out my window and I saw a huge cloud of brownish smoke go up," he told CNN in a telephone interview. "I grabbed my iPhone to go downstairs ... and then the second bomb went off at the Ritz-Carlton, so I then ran around to the Ritz-Carlton and I was able to find that there had been a massive bomb that went off in this ... restaurant area and the explosion had blown out both sides of the hotel."

The chief technology officer for a television station said he had lived at the Ritz for a year before moving to his nearby apartment, and had been impressed by the facility's security.

CNN's Kathy Quiano and Andy Saputra in Jakarta, Indonesia contributed to this report.