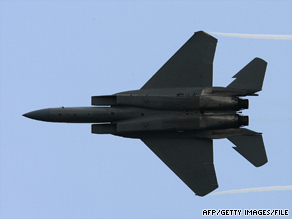 A U.S. Air Force F-15 Eagle similar to this one crashed Saturday in eastern Afghanistan.

The two-man fighter went down while it was conducting military operations, another source, Lt. Col. Reid Christopherson, said earlier.

"At this time, we are very comfortable in stating there was no hostile fire in the incident," Christopherson said.

He added that a board of officers will investigate the crash of the highly maneuverable, all-weather tactical fighter.

In a news release, the military said the incident occurred at 3:15 a.m. Kabul time and also noted that there was no "hostile fire."

"We mourn the loss of these two airmen and our thoughts are with their families, loved ones and their unit," the news release said. "Only after a deliberative and thorough investigation will we know what caused this event. "

A spokesman for the governor of Afghanistan's central Ghazni province, who goes by the single name Jihangir, confirmed that a U.S. plane crashed in Ghazni's Nawur district before dawn.

"The crash site was sealed off by coalition forces," Jihangir told CNN by telephone, "Afghan police were not allowed to have access to this area."

The Afghan official said the plane crashed in Ghazni, some 160 kilometers west of the town of Ghazni, between the communities of Qaracha and Bahari.

The jet crash comes in a bloody month in Afghanistan.

July's toll of international military fatalities stands at 50, the highest tally so far, a CNN count of official statistics shows.