(CNN) -- Giant jellyfish descend on the Sea of Japan, causing untold devastation to coastal villages and leaving a trail of destruction and human misery behind. 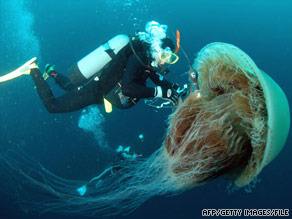 A diver attaches a sensor to a Nomura's jellyfish off the coast of northern Japan in October 2005.

Sounds like a great sci-fi flick. But it's not.

It's real and a nightmare for Japanese fishermen.

The massive sea creatures, called Nomura's jellyfish, can grow 6 feet (1.83 meters) in diameter and weigh more than 450 pounds (204 kilos). Scientists think they originate in the Yellow Sea and in Chinese waters. For the third year since 2005, ocean currents are transporting them into the Sea of Japan.

Monty Graham, a marine biologist at Alabama's Dauphin Island Sea Lab, said the jellyfish grow to an enormous size as they are transported by ocean currents. He said they stay together in packs and as they drift northward, they get caught in fishermen's nets.

The giant jellyfish are one of about 200 species of coastal jellyfish or large jellyfish that exist around the world. But Nomura's stands out because of its enormous size.

"The sheer size of them, individually, makes them fairly spectacular," Graham said.

Spectacular, perhaps, to scientists, but perilous to villagers along the Japanese coast who have seen the destructive habits of these colossal creatures in the past. They had giant-jellyfish invasions in 2005 and 2007, and because they've recently been spotted in the Sea of Japan, they're bracing for another, potentially harmful wave this summer.

The jellyfish destroy fishermen's nets, getting trapped in them, tearing holes and ruining catches.

Fishermen often use expensive mazelike nets that stretch for hundreds of kilometers. When swarms of giant jellyfish tear them, the result is devastating.

"Communities of fishermen and these fishing villages own these nets," Graham said. "When these nets get wiped out, it actually has this economic devastation for an entire community."

The good news is that previous attacks have prompted Japan to put in place a warning system for fishermen. While they still risk losing a big catch, they can, at least, save their pricey nets from the invasion of the giant jellyfish.

It's not clear why waves of Nomura's jellyfish have made it to the Sea of Japan in recent years. Some have speculated that overfishing, pollution or rising ocean temperatures may have depleted the kinds of fish that prey on Nomura's jellyfish in the polyp stage. However, no one is certain, Graham said.

All About Sea of Japan • Yellow Sea • Japan