NEW DELHI, India (CNN) -- While many now recognize the scientific explanation for a solar eclipse, the phenomenon is still marked with tradition and sometimes suspicion in Hindu-majority India. 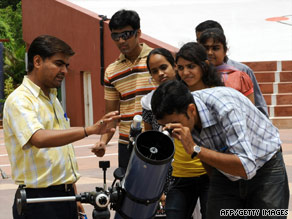 People test the "sky watching telescope" at the Gujarat Council of Science City in India.

The "exceptionally long" eclipse that will cross half the planet Wednesday will be able to be seen by virtually all of the population of China and India.

For beggars in India, the occasion means an extra day of receiving alms and food.

The panhandler in Sandeep Jaggi's neighborhood normally visits the block every week on Tuesdays and Saturdays, as well as the days of a new and full moon.

And because his patrons mark an eclipse with alms-giving, prayers and bathing, he rarely misses the chance to meet them on this day as well.

"It's a family tradition and I follow it," says 34-year-old Jaggi. He will fill the beggar's small steel pail with mustard oil and coins and his disheveled sash with lentils.

For others in the country, the eclipse is not a reason to celebrate, but a more ominous phenomenon. Send us your photos of the eclipse

Most pregnant women hope to avoid giving birth during an eclipse.

"None of the expectant mothers under my treatment are willing to have deliveries on Wednesday," Shivani Sachdev Gour, a gynecologist at New Delhi's Fortis La Femme hospital, told CNN.

In fact, there are critically ill patients who do not want to be in the hospital on the day of the eclipse, she said.

"It may not cause any physical harm to the baby, but it may affect the child's overall personality," said R.K. Sharma, who describes himself as a "remedial astrologer."

A solar eclipse, he says, weakens the sun god temporarily because of an encounter with dragon Rahu and leaves some cascading results everywhere.

"Bathing in holy rivers and ponds during this time thus helps protect health and develop positivism and greater will power," he explained.

About 1.5 million people are expected at one such pond -- the Brahmsarovar, or the pool of Hindu god Brahma -- in northern India on Wednesday.

"They offer prayers to the sun god and take holy dips during an eclipse," said Ashok Kumar Bansal, the sub-divisional magistrate of Kurukshetra, an ancient Hindu city.

But the century's longest total solar eclipse is not just about the dragon-sun combat, it also means business for some.

Travel firms in India have plans in place to cash in on the phenomenon.

Cox and Kings India has a planeload of eclipse watchers heading for the eastern state of Bihar, one of the most preferred locations for sighting the event.

The plane will hover over Gaya in Bihar and return to New Delhi the same day, company spokesman Thomas C. Thottathil told CNN.

Passengers were given two options: to book a "sunside" seat facing the eclipse for about $1,640, or reserve an "earthside" seat for about $610, Thottathil added.