Bowe Bergdahl, an adventurer and gentleman 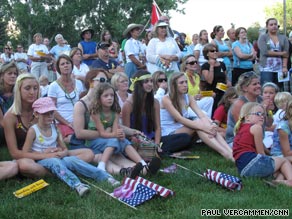 People attend a vigil for Bergdahl in Hailey, Idaho, on Wednesday.

He was a seeker, a hard worker, a man raised in a small town, an avid outdoorsman who took ballet lessons.

By the age of 23, he had learned to navigate the high seas on an expedition that took him from the Atlantic to the Pacific Ocean.

He didn't care for cars, choosing to bike to and from odd jobs he worked to pay for his travels, friends say.

While working on a commercial fishing vessel in Alaska, Bergdahl told Fulmer he was dreaming of riding his motorcycle around the world.

"This kid is crazy," laughed Fulmer, recalling his reaction to his friend's ambitions. "There's no land all the way around the world. Then he explained the whole boat process. Biking around the world, that's one heckuva feat right there."

Enlisting in the U.S. Army was another way for him to understand the world, but has become a horrific encounter with the darker side.

Pvt. Bowe Bergdahl was captured three weeks ago in the Paktika province in southeastern Afghanistan, according to the Department of Defense. The Taliban is holding him, threatening to kill him if foreign troops continue search operations in Ghazni and Paktika provinces, which they claim target civilians, according to Taliban commander Mulvi Sangeen contacted by telephone by CNN Friday at an undisclosed location.

On Sunday, a video was released of Bergdahl dressed in loose fitting blue clothes and sitting on the floor in a location that American officials are not pinpointing publicly.

The soldier seems to get choked up when he speaks of his family -- his parents, siblings, nieces and nephew -- and the girlfriend he hopes to marry.

He adds that he's being treated like "a guest."

It's unclear if he is speaking from a script his captors are ordering him to follow.

Bergdahl's family members, who live in a small rustic home tucked in the woods outside Ketchum, Idaho, have chosen not to speak to reporters.

The Bergdahls released a statement earlier this week: "We appreciate and take comfort in all the kind words and support we've heard."

"We'd like to ask that your concern for our son Bowe also be shared with all of our American service members in harm's way around the world. We are very grateful to all of them."

Bowe Bergdahl was home schooled and taught chivalry at a young age, friends and neighbors of his family say. He is able to have a conversation with anyone, and has a natural curiosity.

"Bowe is not somebody in the corner," said Sue Martin, the owner of Zaney's Coffee Shop in nearby Hailey, Idaho, where Bergdahl once worked as a barista. "You engage and he engages very well."

"He captures you," Martin said.

She recalled going to her car after a snowstorm and seeing that the snow had been scrapped off.

"Bowe would have been out there... He would never say anything," Martin said.

Her shop has become the epicenter of hometown support, with people leaving notes to him.

"Always a knight searching for what is good and right and true in the world," one of them read.

One rainy evening, Blaine Country Sheriff Walt Femling spotted Bergdahl walking his bike on the side of the road, completely drenched.

"I stopped to give him a ride and he turned it down because he didn't want to get my car wet and he continued to walk in the rain. Kind of tells you a little bit about the person," recalled Femling, who know Bergdahl through renting him an apartment the sheriff owned.

"I don't usually rent to 20-year-olds," Femling said, but he trusted Bergdahl.

"There's not many young people who have the kind manners he has," said neighbor Minna Casser. "He's a gentleman and a sportsman. He did some yard work for us. And he didn't just do the job, he went above and beyond what was expected."

And for all the complimentary things people in Blaine County, Idaho, are saying at Bowe Bergdahl, they all make sure at least one thing is understood.

This is not a young man who backs down.

Dan Collins is a fishing boat captain who hired Bergdahl for 10 weeks two summers ago, pulling for sockeye salmon in Bristol Bay, Alaska, up for 18 to 20 hours a day.

"It's just hard, grueling work, hours per day. But he was up to it," said Collins. "I am at times not the easiest guy to get along with, being a fishing boat's captain. But I imagine I am easy compared to what he is dealing with everyday now."

All About Afghanistan War • The Taliban • Blaine County