(CNN) -- The longest solar eclipse of the century cast a wide shadow for several minutes over Asia and the Pacific Ocean Wednesday, luring throngs of people outside to watch the spectacle. 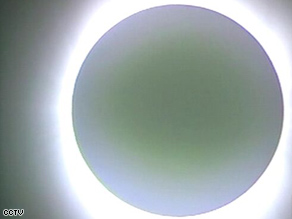 State television in China broadcast this image of the eclipse.

The total eclipse started in India on Wednesday morning and moved eastward across Nepal, Bangladesh, Bhutan, Vietnam, China and parts of the Pacific. Millions cast their eyes towards the heavens to catch a rare view of the sun's corona.

Cloud cover in some areas prevented people from fully savoring the phenomenon. Still, many were awed.

Tim O'Rourke, a 45-year-old freelance photographer from Detroit, Michigan, lives in Hong Kong but traveled up to Shanghai -- touted as one of the best spots to watch the eclipse.

"It was pitch black like midnight," said O'Rourke, standing in People's Square with what appeared to be a crowd of thousands.

"Definitely not disappointed we came. Of course it would have been much better with nice weather, blue skies. But still it was a great experience, it was a lot of fun." he said.

Viewing the eclipse in pictures »

Total eclipses occur about twice a year as the moon passes between the Earth and the sun on the same plane as Earth's orbit. Wednesday's event lasted up to more than six minutes in some places.

In India, where an eclipse pits science against superstition, thousands took a dip in the Ganges River in the Hindu holy city of Varanasi to cleanse their souls, said Ajay Kumar Upadhyay, the district's most senior official. Send us your photos of the eclipse

The ritual turned into tragedy when an 80-year-old woman died and eight others were injured in what was called a stampede in some media reports. Upadhyay called the incident a "commotion" during sacred rituals in Varanasi.

Watch India's reaction to the eclipse »

"Apparently, the woman died because of suffocation and after that there was some commotion, in which some eight other elderly women were injured. But it was not a stampede-like situation," Upadhyay told CNN.

It was sunny skies in Hong Kong for the eclipse, where students, parents and the elderly flooded a primary school to watch in the southern Chinese enclave.

The local astronomy society gave a presentation on how an eclipse happens and children climbed up ladders to look through two large telescopes on the school roof -- packed with sky gazers -- to catch a glimpse of the moon moving across the sun. Read blog on Mother Nature conducting grand eclipse show

Others looked through binoculars covered with solar filter paper or through a large rectangular block labeled "Large Solar Filter," where they could take pictures of the moon moving over the sun.

Astronomy enthusiast Louis Chung, 13, brought his teacher to the school to witness the eclipse.

"City folks wouldn't usually be able to see this. Nature is wonderful. It is awesome to know that nature can provide such spectacular sights," said Chung, a member of the Hong Kong Astronomical Society.

"Nature is incredible, and there is too much we don't know about," said another Hong Kong local, Yee Ping, a journalist for a financial newspaper. "We try to know more and see by our own eyes so we can feel the power of nature."

Richard Binzel, an astronomer at the Massachusetts Institute of Technology, said the total eclipse will first be visible at sunrise in India and about four hours later just east of Hawaii. A partial eclipse will be visible as far south as northern Australia and as far north as Siberia, he said.

In some cultures, legends and folklore surrounds eclipses.

Watch as eclipse-watchers head to China »

In India, an eclipse is considered inauspicious. Women forbid pregnant daughters-in-law from going outside out of the belief that their children could be born with marks. Some temples won't offer any prayers on the day of an eclipse -- such as the one next to the planetarium in Mumbai, which said it won't even light a stick of incense.

In Chinese tradition, there is a story about a heavenly dog eating the sun. As the story goes, people would make noise to scare off the dog and rescue the sun, said Bill Yeung, president of the Hong Kong Astronomical Society.

"In ancient China, we shared the same impression with our Indian friends that a solar eclipse was not a good thing," he told CNN. Read blog on how eclipse-chasers are gambling on weather

Some of the more unusual ways to see Wednesday's eclipse include a cruise ship that will travel along the centerline off Japan and from aboard a 737-700 chartered plane in India.

More conventional viewing parties in Shanghai had been planned along the beach, in a park and in skyscrapers. A music festival has been organized in Japan's Amami island, with more than 6,000 people expected, and Japanese television has shown rows of tents set up on Akusekijima island.

The witnesses of the eclipse will range "from the farmer who only knows legends of eclipses and may not know this is happening at all to the world's experts who have come specifically to the Shanghai region to make the most detailed scientific analysis possible," added Binzel, the MIT astronomer. iReport.com: Solar eclipse as seen from a Buddhist temple

Bob Johnson, of Sasketchewan, Canada, applied for his first passport to come and see the eclipse in Shanghai.

"During totality, we didn't see anything. We saw up to 60 percent partial eclipse but then the clouds came in and it downpoured," said Johnson. "I am not really disappointed. I'm a lot happier than yesterday because I didn't think I'd see anything. The partial was beautiful."