(CNN) -- North Korea on Thursday launched a scathing personal attack on U.S. Secretary of State Hillary Clinton, raising comparisons with previous colorful comments about the West by the communist regime. 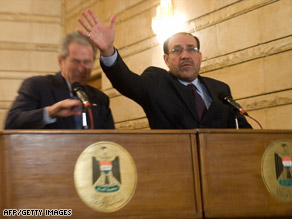 Bush: "A chicken soaked in the rain," according to a North Korean Cabinet newspaper.

"Sometimes she looks like a primary schoolgirl and sometimes a pensioner going shopping," the statement said.

In no particular order, here are some of the most outspoken comments of recent years:

In October 2001, North Korean newspaper Rodong Sinmun said U.S. President George W. Bush was "an incompetent and rude president who is senseless and ignorant as he does not know even elementary diplomatic etiquette and lacks diplomatic ability."

In March 2002, after Bush bracketed the communist state of Kim Jong-il with Iran and pre-war Iraq as being part of an "axis of evil," the North shot back and called the United States an "empire of evil," KCNA reported.

In May 2005, North Korea described Bush as "a hooligan bereft of any personality as a human being, to say nothing of stature as president of a country. He is a half-baked man in terms of morality and a philistine whom we can never deal with."

In December 2008 after an Iraqi reporter threw his shoes at Bush at a news conference in Baghdad the North's cabinet newspaper said in an article that Bush looked like "a chicken soaked in the rain," according to Reuters.com.

In April 2004, a North Korean Foreign Ministry spokesman described U.S. Vice President Dick Cheney as a "mentally deranged person steeped in the inveterate enmity towards the system" in the North.

In May 2003, the North said Cheney "is hated as the most cruel monster and blood-thirsty beast as he has drenched various parts of the world in blood."

In May 2004, the North branded the Grand National Party of South Party a "vegetable assembly" and a "modern brand Nazi party."

In November 2003, after U.S. Defense Secretary Rumsfeld described North Korea as an "evil country" and an "evil regime," KCNA shot back, describing him as a "political dwarf, human scum or hysteric. His hands are stained with the blood shed by so many people. He is, indeed, a human butcher and fascist tyrant who puts an ogre to shame."

In May 2005, after U.S. Secretary of State Condoleezza Rice described the North as an "outpost of tyranny," a North Korean Foreign Ministry spokesman described Rice as "no more than an official of the most tyrannical dictatorial state in the world. Such woman bereft of any political logic is not the one to be dealt with by us."

In May 2009, North Korean newspapers said Japanese Prime Minister Taro Aso was "greedy for power" and "incompetent in politics." According to KCNA, they described him as "nothing but a political charlatan who does not know where to stand, a mere puppet and a guy with a poor knowledge of history."