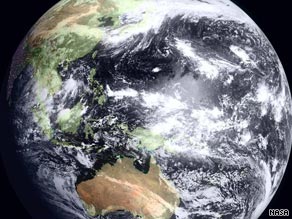 A Japanese satellite took this image of the eclipse an hour before totality.

The longest solar eclipse of the century cast a wide shadow for several minutes over Asia and the Pacific Ocean, luring millions outside to watch the spectacle.

The total eclipse started in India on Wednesday morning and moved eastward across Nepal, Bangladesh, Bhutan, Vietnam, China and parts of the Pacific.

NASA said the two images, left, were taken from a Japanese satellite. Read about when the lights went out in Asia

The first showed the Earth at 8.30 a.m. local time in Taiwan and the second, an hour later, when the moon completely overlapped the sun (called totality) casting a huge shadow over the area.

The longest period of totality occurred over the Pacific, where the total eclipse lasted more than six minutes, NASA said.

View the eclipse in pictures »

Total eclipses occur about twice a year as the moon passes between the Earth and the sun on the same plane as Earth's orbit.