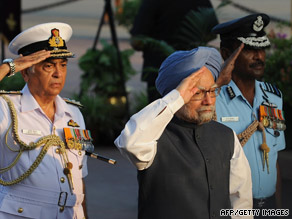 Manmohan Singh, center, honors a war victory in New Delhi on Sunday, the same day he launched a sub.

"Today, we join a select group of five nations who possess the capability to build a nuclear-powered submarine," Singh declared in his speech at the eastern naval base of Visakhapatnam.

Although he billed the submarine as an outcome of a public-private partnership, the Indian leader did mention Russia in his address.

"I would also like to express our appreciation to our Russian friends for their consistent and invaluable cooperation, which symbolizes the close strategic partnership that we enjoy with Russia," Singh remarked.

Nonetheless, he called for leveraging the strengths of India's private industry for defense goals.

Singh, however, insisted the submarine launch reflected no aggressive plans by his country.

"We do not have any aggressive designs, nor do we seek to threaten anyone. We seek an external environment in our region and beyond that is conducive to our peaceful development and the protection of our value systems," Singh said.

The launch came 11 years after internationally condemned tit-for-tat nuclear tests -- first by India and then by Pakistan -- in May 1998.

All About India • Manmohan Singh • Russia