NEW DELHI, India (CNN) -- Expanded testing across India in the past three years shows a 2,000 percent jump in the number of HIV cases among children, the country's health minister announced Wednesday. 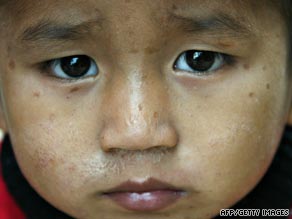 An HIV-positive Indian child at a government treatment center. More than 14,000 children get free care.

In November 2006, health authorities counted 2,253 children in India with HIV, the virus that causes AIDS, Ghulam Nabi Azad told parliament. The number went up to a "cumulative total" of 52,973 in May this year, he said.

The huge increase in the number of confirmed cases may be due to the expanded testing for the virus. India, home to more than a billion people, currently has 217 facilities for HIV/AIDS treatment and 5,155 counseling and testing centers.

At present, 758,698 HIV-positive patients are being treated under the country's AIDS control program, Azad said.

More than 232,908 AIDS patients, including 14,474 children, are receiving free treatment at the designated facilities, he added.

Authorities say mother-to-child transmission is a major source of infection among children.

Last year, 19,986 pregnant women among more than 4 million tested were found to be HIV-positive, said Azad.

Of them, 10,179 received treatment to prevent transmission to their babies.