(CNN) -- A group claiming to be the Indonesian arm of the al Qaeda terrorist network is purportedly taking responsibility for a pair of deadly bombs that exploded within minutes of each other at two luxury hotels in Jakarta. 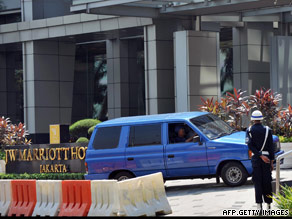 The JW Marriott in Jakarta, Indonesia, which was bombed July 17, is guarded Wednesday.

CNN could not independently authenticate the statements.

One of the statements says the Ritz-Carlton attack was carried out by "one of our mujahedeen warriors against the American lackeys and stooges visiting the hotel."

"God has given us a blessing for us to find a way to attack the biggest hotel that America owns in the Indonesian capital of Jakarta -- the Ritz-Carlton, where security was very tight making it very difficult to initiate the attack that we did," the statement says.

The statement mentions members of Britain's Manchester United soccer team, which had been scheduled to check into the Ritz-Carlton on July 19 but canceled its trip after the bombing.

"Those players are Christians and therefore do not deserve Muslims' money and respect," the statement says.

The other statement addressed the Marriott attack. It claims that the target in that bombing were Americans with ties to the Indonesian Chamber of Commerce and Industries, known as Kadin.

Police say a third bomb had been planted in an 18th floor room of the Marriott two days before the other two bombs exploded. The unexploded bomb -- which was timed to detonate on the upper floor before the first blast tore through the Marriott's lobby area at 7:47 a.m. -- was found and defused, police said.

All About Indonesia • Terrorism