WASHINGTON (CNN) -- The United States on Thursday imposed economic sanctions on a North Korean company that the United Nations said is linked to the country's nuclear weapons program. 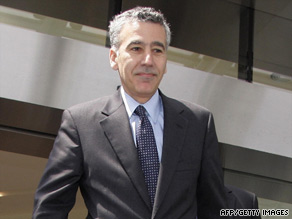 A U.S. Treasury Department statement said Korea Hyoksin Trading Corporation is owned or controlled by Korea Ryonbong General Corporation, which has been designated by the United Nations as a proliferator of weapons of mass destruction.

The order freezes any U.S. assets of Hyoksin and prohibits any Americans from dealing with it, the statement said.

It notes that a sanctions committee set up by the U.N. Security Council recently cited Hyoksin for involvement in development of weapons of mass destruction.

The announcement came as the U.S. coordinator for implementation of U.N. sanctions against North Korea met Thursday with the Security Council sanctions committee.

"What I found in that room and in my dealings with other governments ... is unity of view," Goldberg said, specifically mentioning China, which is North Korea's longtime supporter.

"Commitment to implementation is strong and unified," he said.