ISLAMABAD, Pakistan (CNN) -- A new Taliban military "code of conduct" calls for restrictions on suicide attacks aimed at avoiding the killing of civilians, but U.S. and Afghan military officials dismissed the document as propaganda, calling it hypocritical. 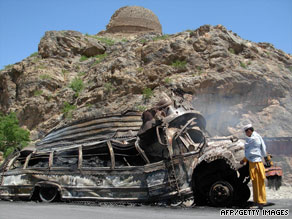 A Pakistani looks at a bus set on fire by Taliban militants in northwest Pakistan in June.

The booklet, obtained by CNN in northwestern Pakistan, has emerged during a crucial moment in the fight between troops and militants in Afghanistan, where battles are raging in the country's Helmand province and troops work to establish stability for the upcoming presidential elections.

"Suicide attacks should be at high value and important targets because a brave son of Islam should not be used for low value and useless targets," the code of conduct said. "In suicide attacks the killing of innocent people and damage to their property should be minimized."

It also says "all mujahideen must do their best to avoid civilian deaths and injuries and damage to civilian property." And it says that mujahideen "should refrain" from disfiguring of people, such as the severing of ears, nose and lips.

"Mujahideen must be well behaved, and treat the people properly, in order to get closer to the hearts of civilian Muslims," the code said.

Lt. Cmdr. Christine Sidenstricker, U.S. military spokeswoman in Kabul, saidit was notable that the document is intended to be "prescriptive on how the bad guys are supposed to conduct themselves."

Watch why Taliban have brought out new code of conduct »

"Their day to day actions contradict everything in it," Sidenstricker said. "The long and the short of it is, they don't operate in accordance to their code of conduct."

Watch why Taliban are proving hard to uproot »

Also, half the casualties resulting from roadside bombs were civilians.

"The booklet also says suicide attacks should always be done against high-ranking officials. In reality, they have killed more then 200 Afghan civilians," she said.

Afghanistan Defense Ministry spokesman Gen. Zaher Azimi said the code is " propaganda" and that the Taliban "will never implement that." He cites a recent beheading of a retired Afghan soldier as a clear example of the group's real behavior.

"It was against all the laws of war," Azimi said.

The code of conduct is dated as coming into effect on May 9, 2009. It is similar to a previous document that emerged in 2006 and covers many topics.

For example, it says "kidnapping for ransom is strictly prohibited."

As for prisoners, the code says "it is strictly prohibited to exchange prisoners for money. Killing can only be decided by the Imam or his deputy. No one else has the right to do so." It says an imam or his deputy are on the only ones to make decisions on whether to kill, release of exchange a captured "military infidel."

Further, it says the practice of taking weapons from people by force "is no longer permitted."

"But people may hand over their weapons voluntarily," it said.

And it says that the "mujahideen of the Islamic Emirate should not collect donations forcibly" and that "people should be free to choose who they want to give to."

"If there is a need to do this, they should get permission from authority and the search should be done in the presence of the imam of the local mosque and two elders."

The code said mujahids aren't permitted to smoke and that "a male who has not yet grown a beard may not stay in a common sleeping area with other men."

CNN's National Security Analyst Peter Bergen said the militants "clearly" are aware of the need to win "hearts and minds" and are trying to rectify the "mistakes" of al Qaeda in Iraq.

"They have their own counter-insurgency strategy in winning hearts and minds," Bergen said. "This is a corrective, absolutely."

He said "there's a window for both sides to make some progress" and the Taliban want to exploit the moment.

"The Taliban believe they are either winning or not losing. If you are an insurgent not losing is important," he said.