ISLAMABAD, Pakistan (CNN) -- Security forces patrolled the streets of the eastern Pakistan city of Gojra on Sunday, one day after seven people were killed and 20 injured when Muslim demonstrators set fire to houses in a Christian enclave and fighting broke out, authorities said. 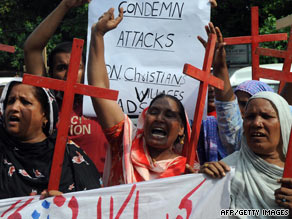 Pakistani human rights activists in Lahore protest on Saturday over the anti-Christian violence in Gojra village.

Police said Muslims were enraged over an alleged desecration of pages in the Quran at a Christian wedding last Saturday, and held a rally to protest such an act.

The Quran is the Muslim sacred text.

Shehbaz Bhatti, federal minister for minorities, told CNN that four women, two men and a child, all Christians, were either killed when their houses were burned or were shot to death.

Some 50 houses were burned down and more than 100 were looted by the protesters, Bhatti said.

The incident occurred in Gojra City, 160 kilometers or around 100 miles southwest of Lahore.

There was a demonstration by about a thousand Christians who refused to bury their dead until the government registered a criminal case against those they alleged to have carried out the attacks.

Meanwhile, police in Islamabad reported the Friday arrest of an al Qaeda member thought to be involved in several attacks.

He is suspected of being involved in strikes on several targets, such as the Danish Embassy, police and a hotel, and is also suspected of targeting a rally for Chief Justice Iftikhar Chauhdary, authorities said.

The suspect is a resident of Sargodha, which is 165 kilometers (more than 100 miles) northwest of Lahore and has a house in Rawalpindi that has been used to facilitate insurgent acts, police said.