(CNN) -- Former U.S. President Bill Clinton landed in North Korea early Tuesday on a mission to negotiate the release of two American journalists imprisoned there since March, according to the country's state news agency and a CNN source. 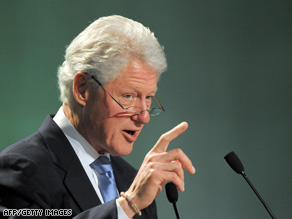 Former U.S. President Bill Clinton is shown at an environmental summit in Seoul, South Korea, in May.

The North Korean news agency KCNA did not disclose the purpose of the visit in its three-line dispatch. But a source with detailed knowledge of the former president's movements told CNN late Monday that Clinton was going to seek the release of Laura Ling and Euna Lee, both reporters for California-based Current TV -- media venture launched by Clinton's former vice president, Al Gore.

The women were arrested while reporting on the border between North Korea and China and sentenced in June to 12 years in prison on charges of entering the country illegally to conduct a smear campaign.

Since the United States has no diplomatic relations with North Korea, efforts to resolve the issue so far have been handled through Sweden, which represents U.S. interests in the reclusive communist state.

Last month, Clinton's wife -- U.S. Secretary of State Hillary Clinton -- said the Obama administration had dropped its request for Ling and Lee to be released on humanitarian grounds and instead was seeking amnesty, which implies forgiveness for an offense.

This change in language is an important distinction that could move North Korea to release the women without feeling that its legal system has been slighted, according to analyst Mike Chinoy.

"I suspect that it was made pretty clear in advance that Bill Clinton would be able to return with these two women otherwise it would be a terrible loss of face for him," said Chinoy, an Edgerton Senior Fellow on Asia at the Pacific Council on International Policy in Los Angeles. "The bigger, broader and more important question is what else could be on the agenda. Will Clinton be carrying a letter from Barack Obama for the North Korean leader Kim Jong Il? Will he meet Kim Jong Il?"

Clinton's mission comes as the United States and its allies in the region are trying to push North Korea back into stalled nuclear disarmament talks. North Korea conducted a nuclear bomb test, its second, in May, and has conducted several missile tests since then. The United Nations responded by tightening and expanding sanctions on the North.

The two nations were on opposite sides in the 1950-1953 Korean War and had no regular contacts before a 1994 crisis over North Korea's nuclear program. North Korea agreed at that time to halt the development of nuclear weapons, but abandoned that accord and withdrew from the Nuclear Non-Proliferation Treaty in 2003.

Clinton had considered visiting North Korea in 2000 near the end of his second term as president. His secretary of state, Madeleine Albright, had gone to Pyongyang in early 2000 to meet with North Korean leader Kim Jong Il -- now widely reported to be ill.