About 200 arrested in violence against Christians in Pakistan

ISLAMABAD, Pakistan (CNN) -- About 200 people have been arrested in a flare-up of anti-Christian violence in Gojra that left seven dead, a government minister said Monday. 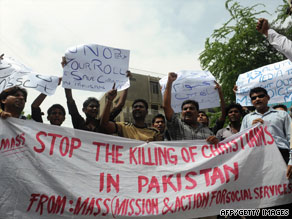 Seven people were killed and 20 injured Saturday when Muslim demonstrators set fire to houses in a Christian enclave and fighting broke out, authorities said. Police said the Muslims were protesting an alleged desecration of pages in the Quran, the Muslim sacred text, at a Christian wedding.

At a news conference in Islamabad carried on local TV, Shehbaz Bhatti, federal minister for minorities, said an investigation determined there was no desecration of the Quran in village 95 Gill near Gojra City, and the allegations were baseless. He also said the government will rebuild all the burned houses.

Bhatti told CNN that four women, two men and a child, all Christians, were either shot to death or killed when their houses were burned. About 50 houses were burned down, and more than 100 were looted by the protesters, Bhatti said. The incident occurred in Gojra City, about 160 kilometers (100 miles) southwest of Lahore.

Kamran Michael, Punjab provincial minister for human rights and minority affairs, who is a Christian, told CNN after meeting with Pakistan's Christian leaders in Gojra that a consensus had been reached to observe three days of mourning, from Monday to Wednesday, for the attack on the Christians.

On those three days, all schools, colleges, missions and educational institutions run by Christians will remain closed. Christian schools in Karachi, which were due to open for the new term Monday, remained closed. However, schools in most other areas of Pakistan are still on summer vacation.

Michael also criticized Pakistan's "law of offenses relating to religion," which has a penalty of life imprisonment for desecration of the Quran and even death for defiling the name of the prophet Mohammed. He called the law unjust and misused, and he strongly condemned it, demanding that it be amended because of its misuse against minorities.

All About Pakistan • Religion