One dead as plane crashes at Thai airport 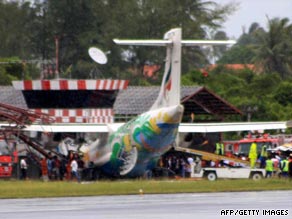 The plane carrying 68 people and four crew members skidded and then crashed after landing at Koh Samui airport, officials with the civil aviation department said.

The ATR-72 turboprop had taken off from the town of Krabi on the west coast Thailand for its trip to the resort island of Koh Samui.

Seven people were seriously injured and emergency officials were working to free the plane's co-pilot who was trapped in the plane, officials said.