(CNN) -- The raging wildfires that killed hundreds of Australians earlier this year could not kill Sam the Koala. 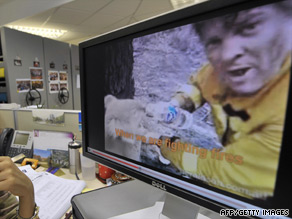 The plight of Sam the Koala became a huge hit on video-sharing Web site YouTube.

But an illness endemic in the country's koala population did.

Sam, the 4-year-old Koala who became famous after he was injured and rescued from the historic wildfires, died Thursday, an Australian wildlife shelter said.

"It is with great sadness today that TressCox Lawyers on behalf of the Southern Ash Wildlife Shelter announce that Sam the Koala has lost her latest fight for survival," the shelter said in a statement. "Sam became a symbol of hope and determination across the nation for both survivors of the black Saturday bush fires and all those that fought and lent support throughout the community."

Sam was catapulted into fame in February when a photograph surfaced showing a firefighter, marked with soot, holding her injured paw and pouring water into her mouth.

As firefighters continued to battle the brush fires that killed more than 200 people and torched 2,000 homes, Sam was taken to Southern Ash Wildlife Shelter to heal from burns on her paws.

Reporters flocked to the wildlife shelter to do update stories on Sam. One story by Australian local television revealed that Sam, short for Samantha, had quickly gained a boyfriend, a Koala named Bob.

Her paws healed but soon she developed ovarian cysts associated with chlamydia, an ailment that affects 50 percent of Australia's koala population, the shelter said.

"Sam had severe changes in her urinary and reproductive tract that was non-operable and unfortunately had to put Sam to sleep," the statement said.

"The changes were consistent with the Chlamydia infection. It was so severe that there was no possible way to be able to manage her pain."