Fight for future of Afghanistan's culture plays out on TV

KABUL, Afghanistan (CNN) -- Hundreds of excited music fans wait in line on the lookout for their favorite singers on a hit television show. 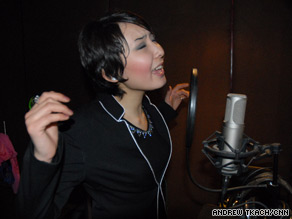 Elaha Sorur was the lone female finalist on this season's "Afghan Star," the country's answer to "American Idol."

Instead of spending the time outside a New York venue or Hollywood soundstage though, these fans braved barbed wire and gun-toting guards in Kabul to attend Afghanistan's premier pop music event: the finals of "Afghan Star," the embattled country's answer to "American Idol."

"For the young generation," says one fan in line, "it's very important to be cool, with a cool mind."

Inside the concert hall, Jahid Mohseni, a 38-year-old Afghan-Australian media mogul, tries to manage the chaos he's created. Singers, child acrobats and TV technicians all compete to get his attention before the start of Afghanistan's biggest night of television.

"Yes, we are promoting social change, but we cannot push Afghan society where it doesn't want to go. This is a commercial enterprise, and it's reflecting what people want," Mohseni said.

In Afghanistan, more than 60 percent of the population is younger than 25, and judging by the popularity of "Afghan Star," "they're like people everywhere. They're not from Mars," Mohseni said.

At the fourth-season finals this year, the audience included those who sat quietly as well as those who loudly cheered for contestants, including Naweed Forugh (who would be named the "Afghan Star" winner), Naweed Sabirpur, Mehran Gulzar and Elaha Sorur, the lone female finalist.

"Art is in the blood of Afghans and has been for centuries, and it is still," Sorur said. "During the years of fighting, the people haven't been able to use their artistry, but with time, it will get better and better. Afghanistan and the people of Afghanistan are ready for a change."

But not everyone is happy with Mohseni's programming choices. Afghanistan's guardians of Islamic values, the Ulema Council, protested that "Afghan Star" and Tolo TV's popular Indian soap operas were not part of Afghan culture.

Afghanistan's minister for information and culture even tried to stop the soap operas in court, claiming that it was a question of national security.

And last year, a female finalist on "Afghan Star" received death threats and was forced into hiding after her head scarf fell to her shoulders during a performance.

"This young woman, beautiful, dancing with her hair free ... that symbolizes everything that is forbidden and was forbidden in Afghan culture," said Havana Marking, director of a documentary about the show's 2008 season, also called "Afghan Star."

Mohseni points out that Afghanistan is near two powerful neighbors: India, with a population of 1.1 billion, and Iran, with almost 70 million people (compared with Afghanistan's estimated 34 million).

"You just have to sit down with your critics and explain that if we don't have Afghan music and entertainment, Bollywood will take over," he said.

"We're just trying to hold our own in the middle of what is effectively a cultural war."

That culture war can be seen on Tolo TV.

After meeting with the Ulema Council, Mohseni dreamed up another reality show called "Tartil," or "Koran Star."

The three finalists were quizzed by religious authorities and judged on how well they've memorized passages from the Quran, Islam's holy book.

There were no wild ovations when the winner was announced. But the finale still produced a bombshell: a shy 16-year-old schoolgirl named Uzra Mohamedi, who accepted the oversize $3,500 check without cracking a smile and dressed in a traditional black veil.

Mohseni said that "Afghan Star" pushes his country forward in subtle ways, for instance teaching a few valuable lessons in democracy. Winners are picked by fans who can vote on their mobile phones -- one SIM card, one vote.

In previous elimination rounds, losers sometimes stormed off the set, refusing to accept defeat. But now they thank their supporters and graciously congratulate the winners.

"This is the educational component of our show, and hopefully it'll rub off on our politicians," Mohseni said.

To coincide with Afghanistan's presidential elections in August, Mohseni created a reality show called "The Candidate" as a way to encourage a more robust political debate. Six young Afghans face off in mock presidential debates and compete in American-style election campaigns.

In the future, Mohseni said he hopes the direction of Afghan culture will be decided democratically without traditionalists imposing values by force or government edicts.

Either way, Tolo TV has an avid audience: According to Mohseni, the finals of both "Afghan Star" and "Koran Star" won their nights' ratings races, easily beating the competition.

All About Islam • Afghanistan • Pop and Rock Music