Pakistani Taliban leader may be dead after U.S. drone attack 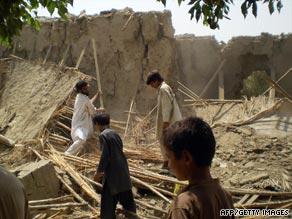 "The Pakistan government has not been able to give 100 percent confirmation yet of whether Baitullah Mehsud is indeed dead," Farahnaz Ispahani, adviser to Pakistan's president, told CNN.

Earlier in the day, Pakistan's foreign and interior ministers said the government was still waiting to conduct DNA analysis to confirm the identity of a man killed Wednesday in an unmanned aerial vehicle strike.

Pakistan's ambassador to the United States, Husain Haqqani, told "The NewsHour with Jim Lehrer" that the charismatic leader's death can be confirmed only after physical evidence is processed, but he added that indications are that the reports are true.

"There are a lot of pointers as a result of which most people believe that Baitullah Mehsud is, indeed, dead, and his own group has announced that," Haqqani said.

If that turns out to be the case, "then that is definitely a major advance in proving Pakistan's determination and the determination of the United States to eliminate extremists and terrorists from our region," he said.

Earlier this year, the United States issued a reward of up to $5 million "for information leading to the location, arrest, and/or conviction" of Mehsud.

The suspected drone fired two missiles into the residence, killing Mehsud's second wife and one other person, according to intelligence sources and relatives. The U.S. military routinely offers no comment on reported drone attacks. However, the United States is the only country operating in the region known to have the ability to launch missiles from drones, which are controlled remotely.

The strike was based on "solid intel," a Pakistani official with knowledge of intelligence matters told CNN. Since the attack, "the Mehsud network has gone quiet as if in shock," the official said.

But the official also noted that Mehsud "has shown up alive after previous near misses." One such near miss occurred in late June at a funeral Mehsud was attending in a Pakistani tribal area. The funeral was targeted in a drone attack but the Pakistani Taliban leader is reported to have missed being killed by a few hours.

This time, however, "there are increasingly strong indications Mehsud is, in fact, dead," according to a U.S. counterterrorism official, who was not authorized to speak on the record.

"We continue to review information as it comes in," the official told CNN. The official said Washington is "seeking its own confirmation" of his death, adding that there may be little DNA to test in the wake of the bombing.

Pentagon spokesman Bryan Whitman only said that the Department of Defense is "aware of the reports." But he said Mehsud's death would be significant.

"This is an organization that tends to be able to regenerate another leader. These terrorist organizations tend to be decentralized in the execution of their operations. I don't want to make more of it than one should of a single individual however, this was an important Taliban leader in Pakistan and if he is no longer able to direct operations that is a good thing."

Mehsud and other key leaders of the Pakistani Taliban have been targeted by the ongoing Pakistani military operation in northwest Pakistan. Hideouts linked to Mehsud are regularly shelled by Pakistani aircraft and suspected U.S. drones.

The U.S. counterterrorism official stressed that, as leader of the Pakistani Taliban, Mehsud has "very strong ties to al Qaeda."

He is suspected of being behind numerous attacks, including the December 2007 assassination of former Pakistani Prime Minister Benazir Bhutto.

Mehsud's close aide recently confirmed that Mehsud was behind the assassination of Bhutto, who was gunned down at a political rally in Rawalpindi, Pakistan. Bhutto's widower, Asif Ali Zardari, is the current president of Pakistan.

Mehsud is also suspected of having been behind other attacks, including the targeting of U.S. soldiers in neighboring Afghanistan.

"There's no doubt he has American blood on his hands," the U.S. counterterrorism official said. "His network is responsible for numerous attacks on coalition forces in Afghanistan."

Mehsud boasted to reporters in May 2008 that he had hundreds of trained suicide bombers ready for martyrdom and was planning to use them to wage a holy war against American and NATO forces in Afghanistan.

Ispahani described Mehsud as "a murderer and a monster" and said his death would be a boon to Pakistan's ongoing military operation against Taliban militants inside its borders.

"Even though people say that the Taliban can [re]group very quickly and can find another leader, actually what this has given us -- if he is dead -- is a vacuum," Ispahani said.