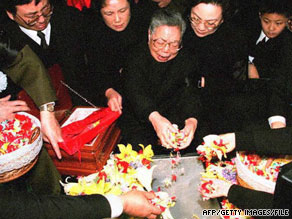 She was "an excellent Communist Party of China member and time-honored loyal communist fighter," the party said in a written statement.

Zhuo stood by Deng through decades of what CNN once described as "amazing comebacks" from "political purges." Though a committed Communist revolutionary, Deng also was a chief architect of some key reforms that reshaped China's economy.

Zhuo met Deng in 1939 when they were young revolutionaries. She became his third wife and mother of his two sons and three daughters. When Deng rose to prominence as the most powerful leader of China, the family became China's "first family."

Zhuo and Deng remained together until his death in 1997.

Part of their story includes time spent together in exile.

In 1966, Deng proposed major reforms including free markets for farmers and incentive bonuses. He was quickly denounced as a "capitalist roader," a Maoist term used for people embracing capitalist ideals.

He was under house arrest for two years, paraded in a dunce cap through the streets of Beijing and forced to wait tables at a Communist Party school.

In 1969, Deng, Zhuo and several of their children were exiled to Jiangxi province in southeastern China. Deng later said only a personal security team supplied by Chinese leader Mao Zedong protected him from being killed.

As Xinhua reported, Zhuo was Deng's companion "through thick and thin."

When he ascended to power in 1978, Deng argued that "poverty is not socialism" and encouraged the creation of a market economy and capitalist-like enterprises. By the early 1990s his reforms had helped lift an estimated 170 million peasants out of extreme poverty.

But he refused to abolish the power of the Communist Party over the lives of China's citizens. And he apparently approved the brutal suppression of unarmed demonstrators in Beijing's Tiananmen Square in June 1989.

The remarkable ups and downs of Deng Xiaoping's long political career took a dramatic toll on Deng and Zhuo's children, CNN reported in 1999, "leaving one son crippled from an attack during the Cultural Revolution but, in more recent years, enabling all five Deng heirs to succeed in business, government or the arts."

The Cultural Revolution was initiated by Mao in 1966 to purge reformists and return the country to his style of communism.

Zhuo took on various roles in the Chinese government. In 1978, she was appointed a consultant of the Central Military Commission General Office, Xinhua reported.

"She served as a deputy to the fourth and fifth National People's Congress and was awarded the Independence Merit Medal from the People's Liberation Army in 1988," the news agency said.

"My father and mother did not just share a family, they shared political ideals and life pursuits," said Deng Rong, in a Xinhua report.

"To complete the last trip with her beloved husband, Zhuo chose to have her ashes scattered at sea as her husband's were," Xinhua reported.

All About Deng Xiaoping • China