(CNN) -- A tsunami watch issued for five nations after a 7.6-magnitude earthquake in the Indian Ocean was canceled about two hours later. 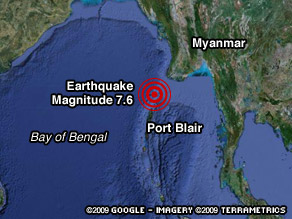 A tsunami watch in effect after an earthquake in the Indian Ocean has been called off.

The Pacific Tsunami Warning Center had issued the watch for India, Myanmar, Thailand, Indonesia and Bangladesh after the quake, which struck at 1:55 a.m. Tuesday (3:55 p.m. Monday ET).

Its epicenter was about 163 miles (262 km) north of Port Blair in India's Andaman Islands, and 225 miles south-southwest of Pathein, Myanmar, according to the U.S. Geological Survey.

Watch where the earthquakes hit »

"Sea level readings indicate that a significant tsunami was not generated," the warning center said in a bulletin. "Therefore, the tsunami watch issued by this center is now canceled."

According to the geological survey, a 6.4-magnitude quake struck near the south coast of Honshu, Japan, 12 minutes after the Indian Ocean quake. The Japan Meteorological Agency issued a tsunami advisory following that quake, but said that the expected wave would be under 2 feet.