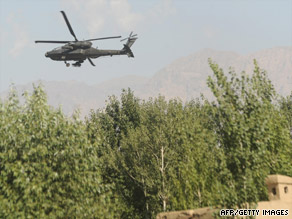 A U.S. Army helicopter banks during a gunbattle Monday in Afghanistan's Logar province.

ISAF and Afghan security forces were conducting a routine patrol when they came under small-arms fire from multiple insurgents, ISAF said. The patrol responded to the attack, but the ISAF soldier was killed.

"My most sincere condolences go out to the families and friends of the ISAF soldier," said Brig. Gen. Eric Tremblay, a spokesman for ISAF. "Protecting the civilian population from insurgent tyranny is tough and difficult in certain parts of Afghanistan, but 42 nations are committed to this mission and we will accomplish it with resolve."

The soldier's next of kin had been informed.

NATO and American forces have suffered record losses in Afghanistan this summer. Seventy-five troops were killed in July, making it the deadliest month for Western troops in the country since American warplanes first began bombing the Taliban in October 2001.

All About Afghanistan • NATO • The Taliban