NEI PU, Taiwan (CNN) -- In the foothills of the Central Mountain chain in southern Taiwan, a rescue helicopter lowers itself onto an athletic field in the town of Nei Pu. 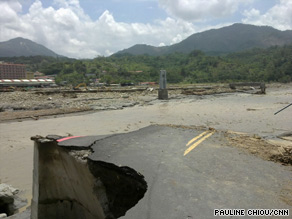 A bridge in Jia Shian, Taiwan, is washed away in the aftermath of Typhoon Morakot.

The helicopter doors open and eight typhoon survivors stumble out with their belongings in plastic bags. It is a scene that plays out all day.

Most of the survivors of Typhoon Morakot are indigenous Taiwanese who live in aboriginal villages in the mountains.

Many old-timers say it is the worst typhoon damage they've seen in half a century.

Typhoon Morakot dumped three meters of rain on southern and central parts of the island. By Thursday morning the government had counted 108 deaths, 62 people missing and 45 people injured from the storm.

Morakot hit Taiwan on Saturday before roaring on to mainland China, where authorities say 1.4 million people have been displaced.

The typhoon left villagers like Shu Yue Hao stranded for days. Her home was one of eight in Jia Mu village swept away by floodwaters when the nearby stream overflowed. "I leave everything up to God, but I do feel very sad," said Shu.

Many of these survivors are taken to a shelter at a school in Nei Pu.

Survivor Dian Xin Yin is at the school hoping to see her mother get out of one of the helicopters.

She says she knows her mother is alive in the mountains because they've talked by phone.

"I don't know when the helicopters will come," Dian told CNN. "They don't have a specific order of which villages to search. The authorities control the schedule."

At the shelter, survivors relive the past few days.

Lee Bai is from I-La, a village of 100 residents. "It was so terrible. This is the worst disaster I've seen in my life. I was stranded for three days," he said.

By nightfall, dozens of families had collected donated straw mats from the gym and brought them to classrooms in another building.

They placed the mats on the floor getting ready for a full night's sleep. Little kids ran around, carrying their donated blankets. iReport.com: Volunteers help victims

This would likely be their first full night's sleep since Morakot plunged them into a nightmare.