SHIAO LIN, Taiwan (CNN) -- Shiao Lin was a village with 160 homes dotting a lush mountain valley. Today, it is a flattened plain of mud with just two homes standing on the edge of the mud. 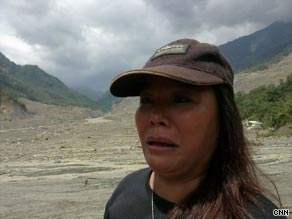 Luo Yong Ling lost her family in the disaster.

The silence in this ghost of a village is a stark contrast to the chaos a week ago when Typhoon Morakot screamed through last weekend.

From the side of the road, Luo Yong Ling looks at what's left of her hometown and cries.

"(Most) of my relatives, including my older brother, are gone. Only my brother's son is alive. More than ten of my relatives and just one left, "she says.

Residents say more people than usual were in the village during the typhoon because Saturday was Father's Day in Taiwan. On this day, many people return to their home villages to be with family.

Watch as people deal with their loss »

Taiwan's Interior Ministry has confirmed 118 killed by the typhoon.

The exact number may never be known because of the hundreds believed to be buried under the mud in Shiao Lin.

On Friday, Taiwan President Ma Ying said the death toll could be as high as 500.

Typhoon Morakot dumped about three meters (118 inches) of driving rain over the region.

The winds and rain caused two mudslides -- one on each side of the valley where the village sits.

One man who lost relatives to the mudslides said he doesn't want to rebuild the village of Shiao Lin.

He tells CNN, "I want this to become a memorial and let the dead rest in peace."