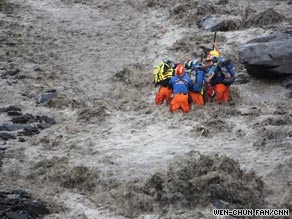 Rescue officials quoted by the news agency said 1,373 were trapped, and 75 helicopters were scheduled to conduct rescue missions Saturday in the counties of Kaohsiung, Pingtung, Taitung and Chiayi.

Mudslides flattened some places in southern Taiwan, including the small village of Shiao Lin. Authorities believe hundreds of people could be trapped under five stories of mud in the village.

Rescuers on Friday tried to determine whether the mud there was stable enough to bring in excavators to begin searching for bodies.

Since the typhoon made landfall over the weekend, more than 31,000 people have been pulled from villages, according to official government figures.

Chen Chiu Lian, 76, who lives in Shiao Lin with her teenage grandson, Wang Hsin Hong, described the moments when the typhoon hit.

"I had just finished eating. My grandson was taking a nap. It rained and rained. There was water to my left and to my right ... The next day, it was still raining.

"Our house was like a boat. The water was like an ocean. How can you escape? There was no way to escape. My grandson told me to swim. I was swimming and crawling through the water and debris."

She said their home was the only one left in the village where about 160 once stood. The two eventually were rescued by a helicopter from the roof of the house, Chen said. They went to stay with friends.

In other remote mountainous areas of Kaohsiung County, where Shiao Lin is , rescues also have proved difficult.

Earlier in the week, the six-story Jinshuai Hotel in Jhihben collapsed into the Jhihben River after its foundations were eroded by surging floodwaters. Media reports showed the building toppling into the water with a huge splash. Those inside had already been evacuated.