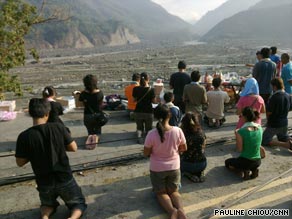 Ma, who has faced heavy criticism from victims of the disaster, ruled out resignation, insisting his government did its best in the face of difficulties, however he pledged an investigation into any irregularities.

"Certainly, I will take full responsibility whatever the blame is because, after all, I am the president of this country," Ma told CNN, saying heavy rains grounded rescue helicopters in the first few days after the storm hit, delaying relief.

Touring disaster areas, Ma has been confronted by angry survivors, and even provoked a scuffle when he opened a weekend baseball game as protesters demanded he step down.

Ma has offered apologies and promises to do better.

"We will find out not only to correct the mistakes but (also) to punish the people responsible," he said.

Others, waiting days in anguish for word on their loved ones, lashed out in anger.

"Local officials don't care," one man said. "There are still people there and they don't do anything."

On Saturday, weeping relatives of typhoon victims set up shrines near devastated villages to calm the spirits of the dead and honor the belief that their souls will return home after seven days.

Morakot hit the island last weekend, dropping 2.6 meters (102 inches) of rain. Before it roared on to mainland China on Sunday, the storm killed at least 123 people in Taiwan.

The death toll could climb to more than 300 after more villagers buried by mudslides and floodwaters are found, Taiwan officials have said.

Mudslides inundated some places in the south, including the village of Shiao Lin, where 160 homes were lost. Authorities believe hundreds of people could be trapped under five stories of mud in the village.

International aid efforts were mobilizing on Sunday, however these were complicated by diplomatic pitfalls in the face of China's territorial claims over Taiwan, which it considers a renegade province awaiting reunification.

Also Sunday, the USS Denver was en route to the Taiwanese coast with additional humanitarian aid and water purification capabilities, the officials said. The Navy ship is expected to arrive Monday, but officials could not say when it will launch its heavy-lift helicopters to drop the aid.

Sources in Washington have said in providing aid to Taiwan, the United States must be sensitive to its territorial relationship with China.