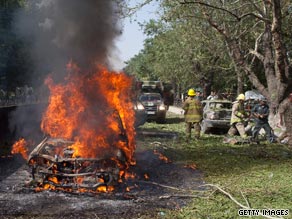 A car burns after the suicide blast outside NATO's Afghanistan headquarters during the weekend.

One person was injured in the attack, in which two rockets were launched, the official said.

The attack comes as Afghan and U.S. military forces are scrambling to provide security for the August 20 presidential and provincial council elections.

The Taliban claimed responsibility for that attack, which heightened security concerns about the election. The Taliban have vowed to disrupt the voting.

Watch the effect of the attack on voters »

This summer has been the bloodiest in Afghanistan since 2001, particularly in Helmand province in the south. U.S., British and Afghan troops have been fighting the Taliban there.

Earlier this month a pre-dawn salvo of at least eight rockets slammed into Kabul, one of them striking within several hundred yards of the U.S. Embassy.

The capital had experienced relative calm in recent months before the attacks.

All About Afghanistan • Kabul • The Taliban