(CNN) -- A man who roasted his pet dog to enjoy as a meal with his family and friends escaped prosecution after authorities in New Zealand determined the animal was killed humanely. 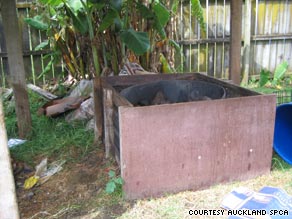 Auckland SPCA officers found the charred body of a Staffordshire terrier cooking in this barbecue pit.

"We were in a dilemma at seeing something we were fairly upset about -- but being in a position of being able to do absolutely nothing about it," said Garth Halliday, of the Auckland Society for the Prevention of Cruelty to Animals, on Monday.

The SPCA -- which investigates acts of animal cruelty and presses charges -- responded to the house in Mangere, south of Auckland.

There, officers found the charred body of a Staffordshire terrier cooking in a barbecue pit.

Watch why owner made decision »

"They had had the dog for a while, but the man told us his wife was getting tired of the dog. He was becoming a pest," Halliday said.

"They decided to get rid of him. But instead of bringing him to the SPCA -- which we recommend -- they decided to have a meal, and cook and eat him."

The family is from Tonga where eating a dog is not uncommon, Halliday said.

Could you eat your pet? »

"He didn't think he was doing anything wrong," he said. Is eating dog meat acceptable? Sound Off below

The incident occurred in February. For the next few months, the SPCA looked into whether the man ought to be charged for the killing. Over the weekend, the organization decided it couldn't because the animal had been killed humanely.

The man, Halliday said, struck the dog in the head with a hammer, rendering it unconscious. He then slit its throat.

"That is the normal way -- if one can use that word -- that animals are killed all over the world," Halliday said.

And under New Zealand's Animal Welfare Act, it is legal to kill an animal if it is slaughtered swiftly and painlessly.

Dr Malakai Koloamatangi, a Tongan cultural expert from the University of Canterbury, told CNN affiliate TVNZ that dog meat is a delicacy enjoyed mostly by young men in his homeland.

Still, the case infuriated and repulsed many New Zealanders.

"It's appalling," said Gracie Williams of Auckland. "As an animal lover, I am sickened. The law needs to be changed."

Auckland Mayor John Banks, an animal rights activist, told reporters that rather than a new law, what is needed is better education of local customs.

In the end, the SPCA closed the case without charges.

"We talked to the people. We told them that although it's not against the law, it is against the general culture of the country to actually kill and eat your own pet dog," Halliday said.