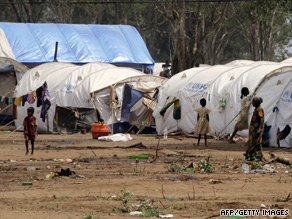 In this file photo Tamil civilians are seen at Menik Farm refugee camp on the outskirts of Vavuniya, Sri Lanka.

Three days of heavy rains have damaged or destroyed nearly 2,000 shelters housing the refugees in the Vavuniya District and in Menik Farm, according to the U.N. Office for the Coordination of Humanitarian Affairs.

An internal U.N. memo obtained by CNN painted a dismal picture for the refugees, who have been caught in mud flows and the runoff from flooded latrines.

"Due to heavy showers on 14 August 09 ... many tents and toilets were submerged/badly damaged," the memo said.

"Reportedly more than 300 families gathered together and marched towards the main access gate of the Zone to protest," the memo continued. "Though ... not violent, they seemed disgruntled and agitated due to the sufferings and expressed their resentment by hooting and making noises."

The camps spread across northern Sri Lanka are home to about 280,000 people, who were displaced in the final months of the nation's civil war.

The flooding came ahead of Sri Lanka's monsoon season, which typically brings heavy rains to the country's northeast from October till January.

"If the rain continues, which is very likely, then the overall situation may go out of control of the management and lead to serious security threat," the memo warned, saying contingency plans are being "discussed and worked out."

Human Rights Watch has called for the immediate release of Tamil civilians living in the camps, which are surrounded by barbed wire, saying they are being confined against their will, like criminals.

"Those are not detention camps," Lakshman Hulugalle, a Defense Ministry spokesman, said in late July. "They are relief villages. All the basic facilities are being given to the people."

Hulugalle said that barbed wire is commonly used to define barriers in Sri Lanka and that military guards were being used out of security concerns. The government fears that rebels are hiding in the camps and is screening people living in them.

Sri Lanka declared victory in May in its 25-year battle with the Tamil Tiger rebels, but concerns remain about how the island nation can heal its deep war wounds.

The rebels -- formally known as the Liberation Tigers of Tamil Eelam -- had waged war for an independent state for minority Tamils in Sri Lanka since July 1983. As many as 70,000 people were killed in the conflict.

Last month the government said it had a 18-day plan to resettle most of the refugees, but added that a lot of work remains to be done to infrastructure and basic services destroyed in the fighting.

Human rights activists say, however, that the government is not working fast enough.

Human Rights Watch said Sri Lanka's goal now was to resettle only 60 percent of the refugees by year's end.