Despite election, U.S. troops in Afghanistan for long haul

(CNN) -- Americans shouldn't expect to see the 62,000 U.S. troops in Afghanistan come home any time soon, no matter who is declared the victor in the country's presidential election. 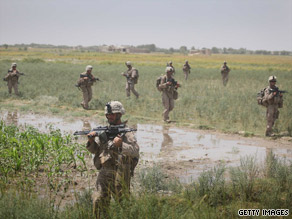 In fact, the Pentagon is planning to add 6,000 troops by the end of the year.

Ballot counting continued Friday, a day after Afghans went to the polls in the nation's second presidential election since the 2001 fall of the Taliban, the strict Islamic theocracy that emerged from the country's civil war in the 1990s. Pre-election polls showed President Hamid Karzai and his former foreign minister, Abdullah Abdullah, as the front-runners. U.S. policy would hold course under either, experts said.

Moreover, a senior U.S. military official said last month that Gen. Stanley McChrystal, the top U.S. commander in Afghanistan, was expected to request even more U.S. troops be sent there. But Defense Secretary Robert Gates has signaled he'd like to wait and gauge the impact of the full 68,000 troops first.

President Obama on Friday emphasized that the United States does not favor any particular candidate.

"Our goal is clear: to disrupt, dismantle and defeat al Qaeda and their extremist allies," he said. "That goal will be achieved -- and our troops will be able to come home -- as Afghans continue to strengthen their own capacity and take responsibility for their own future."

Earlier this month, Gates said it would take "a few years" to defeat the Taliban and al Qaeda, the terror network behind the 9/11 attacks that was given haven under Taliban rule. Gates further said it was a "mystery" how long U.S. troops would remain in Afghanistan.

Officials have told U.S. Senate investigators that any progress in Afghanistan will be "incremental" and could take between two and 10 years.

Almost 800 U.S. troops have died in Afghanistan since the war began, including more than 110 this year.

The United States has spent more than $220 billion on Afghanistan since 2001. It is now spending about $4 billion a month.

U.S. troops in the country took a back seat to Afghan security forces during Thursday's balloting, but one U.S. soldier was killed in a mortar strike Thursday.

Watch how Afghans went to the polls Thursday »

Obama has made Afghanistan a centerpiece of his foreign policy, saying ignoring the country or leaving it to fend for itself poses a direct threat of another 9/11-style attack.

"This is not a war of choice; this is a war of necessity. Those who attacked America on 9/11 are plotting to do so again," Obama said this week.

Daniel Markey, a senior fellow with the Council on Foreign Relations, put it in softer but similar terms.

"We should care about [U.S.] troops, but we should also care about stability in Afghanistan so we don't see a return to something that looks like pre-9/11 Afghanistan," he said.

Not everyone agrees. Stephen Walt, a professor of international affairs at Harvard University's John F. Kennedy School of Government, said he's not convinced that ousting the Taliban from Afghanistan would make the U.S. safer. Terrorists will find other havens, he said, and there's no guarantee that a Taliban ouster from Afghanistan would be permanent.

"The military and police force we're trying to create is going to cost substantially more than the Afghan budget," Walt said.

Also, he said, the Taliban of today is not the Taliban of 2001. It's more a loose coalition of small groups than a broad, unified organization, he said.

In an article published this week in Foreign Policy, Walt drew parallels to the Soviet Union's departure from Afghanistan in 1989.

"The mujaheddin didn't 'follow them home,' " he wrote of the Afghan fighters who pushed out the Soviets. "Were the United States to withdraw from Afghanistan and the Taliban to regain power (or end up sharing power, which is more likely), going after the United States won't even be on their 'to do' list."

All About Afghanistan • The Taliban • Al Qaeda