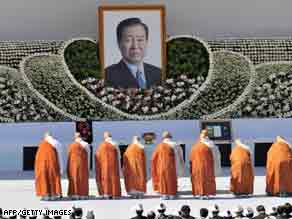 South Korean Buddhist monks pray in front of a portrait of former president Kim Dae-jung during his funeral Sunday.

The solemn Sunday afternoon ceremony was held outside parliament, with a large portrait of Kim placed on a shrine surrounded by flowers.

The funeral followed six days of mourning for Kim, who died Tuesday of a heart failure.

Kim's age at the time of his death was in dispute, with some reports saying he was 85 while others placing it at 83.

Kim's state funeral was the second such ever given in the country, South Korea's Yonhap news agency said.

Another president, Park Chung-hee, was also accorded a state funeral after his assassination while in office in 1979.

The watershed moment of his presidency came in June 2000 when he met North Korean leader Kim Jong Il, becoming the first South Korean leader to do so since the Korean War unofficially ended in 1953.

But rapproachment talks between the two sides hit a wall after conservative South Korean President Lee Myung-bak took office in early 2008 with a tougher stance toward the North than Kim and his successor, Roh Moo-hyun.

Ahead of the funeral, President Lee met with a visiting North Korean delegation, who delivered a message from Kim Jong Il expressing hopes for improved relations between the two countries.

It was the first high-level, cross-border contact in nearly two years.

The meetings between officials of the two Koreas are in stark contrast to the tense public statements they made about each other earlier this year.

Tensions between the two were heightened in July when North Korea launched seven short-range missiles toward the Sea of Japan.

The launches came after North Korea conducted a nuclear test on May 25 and threatened the United States and South Korean ships near its territorial waters.