ISLAMABAD, Pakistan (CNN) -- Pakistani authorities have launched a massive crackdown on terror groups that they say were planning numerous suicide attacks, including in the country's largest city of Karachi. 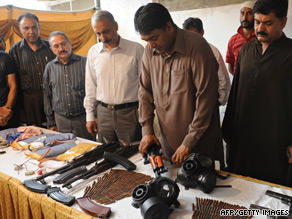 Pakistan security officials show seized weapons and ammunition in Karachi on Sunday after the arrest of seven alleged militants.

At least 13 suspects were arrested Sunday and Monday, including three people carrying suicide jackets and explosives inside a bus station, a police official said.

The three were seized early Monday after police raided a bus station in Sargodha, a city located about 120 miles (190 km) south of Islamabad in Pakistan's Punjab province.

The suspects were plotting to attack two Shiite mosques, police stations, and a Norwegian telecommunications company in Punjab, according to district police officer Usman Anwar. Three other suspects linked to the plot were arrested hours later in Sargodha, he said.

Those arrested early Monday included the Pakistani Taliban's chief in Punjab, according to Anwar.

The Taliban in Punjab have direct ties to Baitullah Mehsud, the former head of the Pakistan Taliban, and have been accused of sectarian murders in Punjab. Pakistan and U.S. officials contend Mehsud was killed in an August 5 drone attack in Waziristan at his father-in-law's house. The Taliban claim Mehsud is alive but ill.

Hakeemullah Mehsud has been selected as the new head of the Pakistani Taliban, a Taliban commander said Saturday.

Seven members of a banned militant group with strong ties to al Qaeda and the Taliban were arrested Sunday along with suicide vests and a large quantity of ammunition, according to the city's police superintendent Mohammed Fayyaz Khan

The group, Lashkar-e-Jhangvi, was planning to conduct attacks in Karachi, according to Karachi Police Chief Waseem Ahmad.

Lashkar-e-Jhangvi is considered a terrorist group by the U.S. State Department, and was banned by then-Pakistani President Pervez Musharraf in 2001. It is described as Pakistan's "most extreme and feared militant group" by IHS Jane's, a provider of defense and security information. The banned Sunni militant group, which began in the 1990s, is a "key ally" of the Taliban and al Qaeda, according to Jane's.

"However, many of its leaders and members have been killed or jailed in recent years and there is little evidence that it remains a coherent organization with centralized structures," Jane's said in an assessment released earlier this month.

The group also has also been linked to the March attack on the Sri Lankan cricket team in the Pakistani city of Lahore.

The recent arrests in Karachi and in Punjab are part of a broader crackdown on terror groups that have extended their reach outside Pakistan's volatile North West Frontier Province and adjacent tribal regions. That is where Pakistani security forces continue to battle a strong Taliban presence.

Taliban militants maintained strongholds within 100 miles of the capital, Islamabad, before Pakistani security forces pushed them back this year.

A month ago, Pakistani authorities unraveled a militant plot to target government buildings in Islamabad with suicide attackers, according to Interior Minister Rehmen Malik.

Three bombers were detained, and along with them suicide vests packed with complex explosives surrounded by ball bearings that would kill anyone within 50 to 100 meters.

"They had the live jackets ... they were staying in one house and they had hidden the suicide jackets not far from that (house) in the hills," Malik told CNN. "Obviously they had a plan in Islamabad because Islamabad is the icon of the country."

He said they first planned to target parliament, then move on to other prominent government buildings in the capital city.

Hitting back at the government would seem to be a high priority for the newly appointed leader of the Pakistani Taliban. Said to be a brazen and young commander, Hakeemullah Mehsud has been linked to past attacks on NATO troops along the Afghan-Pakistan border who are battling a resurgent Taliban in neighboring Afghanistan.

Malik said the government is "not interested" in trying to establish a cease-fire with Taliban commanders during the Muslim holy month of Ramadan, which began this weekend. Past cease-fire agreements between the Pakistani government and tribal leaders negotiating on behalf of the Taliban have failed.

"They are at the weakest moments and everybody knows -- even a child of Pakistan knows about it -- that their back is broken," Malik said. "They are no more powerful ... so we won't give them any time to get energized."

All About Pakistan • Terrorism • Karachi