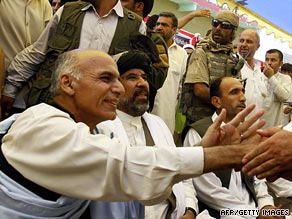 Based on 10 percent of the votes counted, Karzai received 212,927 votes compared with rival Abdullah Abdullah who received 202,889 votes.

Officials stressed that this was only a partial count of last week's presidential election and the margins may change.

Nevertheless, a Cabinet minister in Karzai's government said Monday night that Karzai has won with 68 percent of the vote, according to several media reports.

Full results are expected to be released in mid-September. If no candidate gets 50 percent of the vote, there will be a runoff -- most likely in mid-October.

Abdullah, who was foreign minister under Karzai, has accused the incumbent of rigging the August 20 elections in his favor. Six other presidential candidates have also called for an investigation into "widespread fraud and intimidation" which they said could cast doubt on the legitimacy of the vote. But unlike Abdullah, they did not accuse Karzai of having a role in the alleged fraud.

Holbrooke urged election observers to wait for Afghanistan's Election Complaints Commission to conclude its investigation into allegations of fraud.

"We have charges repeatedly in American elections by candidates that the other side is not allowing (would-be voters) to register," Holbrooke said Tuesday.

He spoke to CNN's Ivan Watson on the sidelines of a ministerial meeting in Istanbul, Turkey.

"We should not be surprised that democracy is imperfect even in western countries," he said. "And Afghanistan has had unique difficulties in holding this election so let's see what happens."

Holbrooke also stressed that it is still too early to declare victory in Afghanistan.

"This election is not over," he said, adding that no one could declare a winner, until the counting of ballots and evaluation of complaints of fraud were completed.

Before voting even began last Thursday, opposition candidates were accusing the Karzai campaign of rigging the election.

Abdullah repeated those allegations in an interview with CNN in Kabul this week. He told CNN's Atia Abawi that his campaign had received what he described as credible reports of fraud in the southern provinces, where security was poor and turnout less than 10 percent.

Abdullah said ballot boxes were stuffed with additional votes, with 90 percent of them going to Karzai.

"This is stealing the elections, and it will not be accepted," he said in the interview. He said he based his allegations on accounts of witnesses and on videos, but no videos were made public nor was it clear whether any had been turned over to the organization investigating election complaints.

A spokesman for Karzai's presidential campaign, Waheed Omar, said the allegations were without merit.

"This is an all out propaganda war that is undermining the process of the ECC (the Electoral Complaint Commission) by bypassing the legal institutions and making it an all out media campaign," Omar said.

The ECC investigates complaints of voting irregularities and fraud. ECC officials said as of Monday the body had received over 600 complaints from voters around the country, and officials characterized dozens as the "highest priority" for investigation.

Abdullah said he believed that the ECC would investigate charges of fraud in good faith but called on the international community to guarantee the credibility of the process, saying that if it failed "it will have consequences for Afghanistan, for all of us."

Abdullah specifically suggested that unanswered fraud in the elections could result in increased tension in the country. Asked whether he thought it would lead to violence at the hands of his supporters, he replied, "I'll try and prevent that, but all I can promise is that I will be with the people."

Abdullah brushed away any suggestion that he might make some sort of agreement with Karzai to join a new government led by the incumbent.

"I will not make a deal, enough deals have been made in this country and that's taking this country to the past," Abdullah said.