UK: Troops did not die for just 150 Afghan votes

LONDON, England (CNN) -- UK officials have sought to play down low voter turnout in Afghanistan's elections amid reports just 150 people cast their ballots in an area where four British troops died securing it from the Taliban. 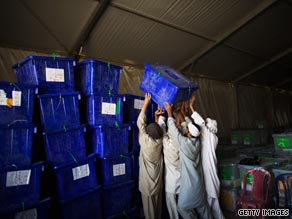 Ballot counting in the Afghan elections is expected to take several weeks.

British media claimed that early estimates of ballots in the former Taliban stronghold of Babaji in Helmand province indicated few exercised their voting rights, despite the efforts of Operation Panther's Claw, a five-week offensive against militants in the region.

The claims have fueled debate in Britain over the country's continued military role in Afghanistan as the country's death toll since operations began in 2001 pushes past the 200 mark.

Britain's ambassador to Kabul, Mark Sedwill, told journalists that while turnout in the August 20 presidential and provincial vote was low across the country, this was not a reflection of the success or failure of Panther's Claw.

"Panther's Claw, although timed to try to improve security for people to move around for the election, was not specifically itself about the election," Sedwill said via videophone link from Kabul.

"The clear phase of that operation only ended a couple of weeks before the election... there is a long road to go until that entire area is fully secure."

An editorial carried on the British Ministry of Defense Web site acknowledged that "many commentators are questioning whether the loss of... British lives in the operation was worth enabling such a small number of voters to exercise their democratic right."

"British forces know exactly what they fought for. They have seen with their own eyes the improved quality of life that security now enjoyed by thousands of Afghans in Babaji has delivered," Pulford said.

The Afghan Independent Elections Commission said with 17.2 percent of polling stations tallied, Karzai had 44.8 percent against Abdullah's 35.1 percent. Candidates must get 50 percent to avoid a run-off between the top two contenders.

Final confirmed results are not expected until mid September, with a run-off likely to be held in October if necessary. Allegations of voter fraud on all sides are expected to further complicate proceedings.

The British Foreign Office said it was too early to speculate on voting figures in southern Afghanistan and Babaji in particular.

"While there has been speculation on these figures, much of which has been contradictory, we need to wait until the Afghan Independent Elections Commission produce their official results," a spokesman said.

"It is wrong to speculate on turn-out before the have finished counting and verifying the ballots."

Sedwill said he was "satisfied" with how the "rough and ready" election had been run, and that although participation in election had been low across the country, this did not represent a victory for the Taliban.

"Turnout was down, but it was down across the country although obviously the intimidation effect that the Taliban has in the south and the east did have an impact, but they were seeking to stop the elections all together not imply to disrupt the turnout and in that they failed," he said.