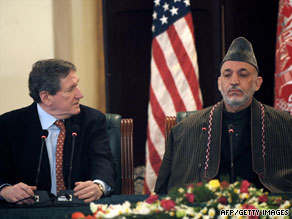 Afghanistan President Hamid Karzai, right, and Richard Holbrooke at a meeting in Kabul on February 15.

"There was a back and forth over particular issues," the official said, "We're not going to deny that."

The meeting came in the midst of opposition candidates accusing the Karzai campaign of rigging the election.

Karzai leads his rivals, according to the latest partial election results issued this week with 422,137 votes, compared to 330,711 for his nearest challenger, his former foreign minister, Abdullah Abdullah.

But only 17.2 percent of the ballots from the August 20 election have been counted and final results are not expected until September.

Afghan officials monitoring last week's presidential and provincial elections said Friday 1,740 complaints had been filed on and after the polling day, with 270 of them deemed major.

Election complaints included polling irregularities, voter intimidation, and ballot stuffing. The Electoral Complaints Commission said that in order for election results to be certified, it must resolve the complaints it has received.

"If proved valid," the commission says, these complaints "could have material effect on the results" of the elections.

Candidates must get 50 percent of the vote to avoid a run-off. If no candidate wins an absolute majority, there will be a run-off between the top two contenders, most likely in mid-October.

Abdullah has accused the incumbent of rigging the elections in his favor. Six other presidential candidates have also called for an investigation into "widespread fraud and intimidation" that they said could cast doubt on the legitimacy of the vote.

Only Abdullah accused Karzai of having a role in the alleged fraud. But six other presidential candidates have also called for an investigation into "widespread fraud and intimidation" that they said could cast doubt on the legitimacy of the vote.

The Obama administration official described the session with Karzai as a "difficult meeting" and "very tough," but denied media reports that Holbrooke "stormed out."

The discussion took place during a meal and it ended "amicably," according to the official who said there were follow-up meetings between Holbrooke and Karzai.

The official also denied media reports that Holbrooke tried to dictate to Karzai that there must be a runoff election. Holbrooke, the official said, underscored that the election process should be respected and that all sides should let it "play itself out."

"If that means it moves to a second ballot," the official said Holbrooke told them, "then so be it."