PALLAVAKAM, India (CNN) -- South India's sun beats down on a long line of trucks wending to the Bay of Bengal. In the back of these trucks, giant, brightly painted statues of the Hindu god Ganesha are waiting to be dropped in the nearby ocean. 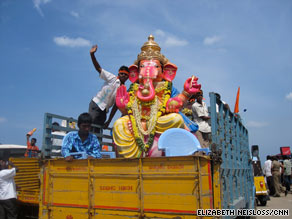 Ganesha worshippers transport their Idol for an immersion ritual.

All over India, Hindus recently celebrated the birthday of the elephant god and now the idols made for this festivity are being taken to India's ocean, rivers and lakes and deposited.

It's part of the Hindu religious cycle. But it's also a huge source of pollution. And in recent years, idol immersion has become a popular local event, with some statues so huge they must be lifted by cranes.

The Ganeshas gleam with gold paint and glisten with reds, pinks and greens. But scientists who've studied the problem say these paints often contain toxic metals, such as lead and mercury. They contaminate plants, and poison fish and irrigation and drinking water. They end up in the human food chain.

The problem is not just caused by idols of Ganesha, but by the many other Hindu god idols as well, such as Saraswati and Durga. Hundreds of thousands of god idols are immersed every year in festivals across India.

A detailed study of the problem has been done by Shyam R. Asolekar of the Indian Institute of Technology in Bombay. He estimates that, in the city of Mumbai alone, several hundred thousand idols are made annually.

Decades ago, there were far fewer idols and idols were made of mud and biodegradable materials, Asolekar said. The effect also was "minimal" he said, because waterways weren't linked as they are now. As a result of water and irrigation projects, "connected water systems and dams have reduced the flow of water" and dramatically increased the effect of pollution.

According to Asolekar's study, "Forbidding the disposal of painted idols, ornaments and decoration is the only sure way of protecting our water bodies."

Asolekar dismissed the idea of an eco-friendly idol, saying even large amounts of mud kill waterways.

"The number of idols is so high," he said, "no matter what the material, there will always be an impact. Even organic substances in large quantities cause a problem."

He suggests a "dry immersion," in which the idol is sprinkled symbolically with water and then later dried for reuse. This approach would face great hurdles in a country where religious rituals have deep social and cultural ties and change comes slowly.

Another possible interim measure uses a polymer-lined tank for immersion. More than 100 such tanks have been installed in Mumbai. The linings can be rolled up after use and the materials separated into bio and nonbiodegradable materials for composting and landfill. The water is filtered. But this solution is far from ideal, Asolekar said, as tens of thousands of such tanks would be needed, and there is still plenty of contamination.

"It will take time to change people's attitudes," he said.

All About India • Mumbai • Hinduism