BEIJING, China (CNN) -- Some of the tens of thousands of refugees who fled to China to escape fighting in Myanmar are beginning to return home as tensions have eased, police said. 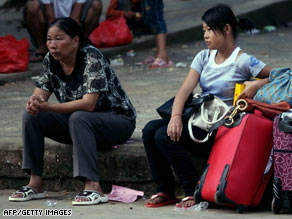 Refugees from Myanmar sit with their possessions at a camp in Zhenkang, in southwest China, on Sunday.

The exodus of residents along the border grew to a flood last week as Myanmar government troops battled ethnic minority groups and their armies in the country's northeast. The region has an estimated population of 150,000.

There were casualties on both sides of the border, according to Meng. Shells fired into Chinese territory killed one person and injured two others, while fighting in Myanmar killed a Chinese and wounded 13 more.

China has been providing emergency shelter, food and medical care for the refugees.

All About Myanmar • China