BEIJING, China (CNN) -- China -- showing its displeasure with the Dalai Lama's visit to Taiwan this week -- has canceled upcoming trips to the island by top state officials, state-run media reported. 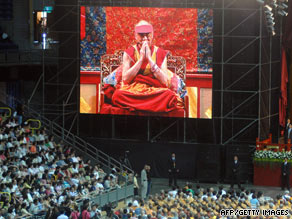 A screen shows the Dalai Lama praying at a ceremony in Kaohsiung, Taiwan, for typhoon victims Tuesday.

Beijing has accused the exiled Tibetan leader of making his visit for political reasons.

China's response appeared to be measured, because not all cross-strait events have been canceled. Several new direct flights between the mainland and Taiwan started this week.

The Dalai Lama has maintained that he is in Taiwan only to support recent typhoon victims.

He addressed thousands of followers at Kaohsiung Arena in southern Taiwan on Tuesday, leading prayers for the victims of last month's Typhoon Morakot before delivering a sermon.

The spiritual leader spoke to a packed audience of about 15,000. Crowds lined up early, well ahead of the 9:30 a.m. start.

"As soon as I received the invitation, I know there's some complications maybe. But it is my sort of moral responsibility to come and to see, show my face, to those people who are passing through a difficult period," the Dalai Lama said in a CNN interview.

Watch as Dalai Lama opens up »

Xinhua reported Sunday that Beijing maintains "resolute opposition" to the visit, which it said "is bound to have a negative influence on the relations between the mainland and Taiwan."