CIANJUR, Indonesia (CNN) -- More than a day after a major earthquake jolted Indonesia's Java Island, killing at least 57 people, there is still no word from remote villages along the coast, a relief worker told CNN Thursday. 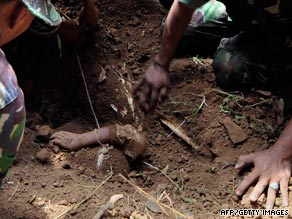 Soldiers try to dig out the body of a victim buried by a landslide caused by the earthquake.

"This earthquake has injured hundreds of people and (destroyed or damaged) thousands of houses," World Vision's Katarina Hardono said.

"We worry that the number can be easily more because in many places, actually the coastal areas, we still (haven't gotten) any news."

Rescuers are still searching for dozens of people feared trapped in a quake-triggered landslide in Cianjur in West Java. They pulled several bodies from the rubble Thursday bringing the death toll from the quake to 57.

"The death count has been thankfully low, but we have to remember that tens of thousands of homes have been damaged or destroyed and children and adults are urgently in need of relief items," said Hardono, who spoke to CNN from the Indonesian capital, Jakarta.

Watch description of the evacuation after the quake hit »

He said there was no need for foreign assistance just yet.

"Until now the Indonesian government is still able to handle it by itself using existing national resources," he said, according to Antara.

Rescuers in Cianjur used their hands and rudimentary tools to try to pry away the rocks, some that were bigger than cars. No heavy machinery could be brought in to help in the rescue effort because many roads in the area were blocked.

The 7.0-magnitude temblor jolted the island on Wednesday shortly before 3 p.m. local time (4 a.m. ET). More than 400 people were injured.

Watch how buildings swayed during quake »