(CNN) -- A U.N. special representative wants an "independent investigation into the authenticity of a video" purportedly showing Sri Lankan troops killing two "naked and helpless men," as other corpses lay nearby. 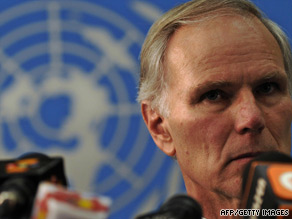 "These images are horrendous and, if authentic, would indicate a serious violation of international law," Philip Alston, the U.N. special rapporteur of the U.N. Commission on Human Rights on Extrajudicial, Summary, or Arbitrary Executions, said.

Alston's comments were made in a United Nations press release on Friday, and Alston has been interviewed on the issue by several news outlets since.

The video was obtained by Journalists for Democracy in Sri Lanka, an advocacy group based in Berlin, Germany, that accuses the Sri Lankan government of harassing and intimidating journalists.

CNN could not independently verify the authenticity of the video nor could it determine when or where it was shot, but sources in Sri Lanka told CNN they believe it was shot in January as the army closed in on the remnants of the Tamil Tigers in the country's civil war.

The crudely shot video shows a naked, bound and blindfolded man being pushed to the ground by men wearing what appear to be military camouflage fatigues. One of the men kicks the blindfolded man in the back. Another man raises a gun, points it at the back of the man's head and pulls the trigger.

A loud crack is heard; the man slumps to the ground. Off-camera, someone can be heard saying in Sinhala, the majority language of Sri Lanka, "I think he looked back."

The execution-style shooting is repeated with a second man, also bound and naked. Off-camera, a voice can be heard saying, "This is like hitting midgets."

All the while someone is recording the scene, apparently with a cellphone camera. Panning across the open field, the camera reveals nine bodies, some lying in pools of blood. From the video alone, it's impossible to tell who they were or who killed them.

Journalists for Democracy says it is evidence of atrocities committed during the final months of the 26-year conflict that became infamous for its merciless killing: the jungle warfare between the Sri Lankan army and the Tamil Tiger rebels. Each side has accused the other of atrocities, though evidence surfaced to support the claims has surfaced only rarely.

A Sri Lankan official said the video was faked.

But Journalists for Democracy -- which would divulge neither how it obtained the video nor from where -- said the the men carrying out the executions are wearing Sri Lankan military uniforms.

"The government clearly has nothing to lose and everything to gain by inviting an independent international investigation that would take the pressure off the government, it would enable it to face its own Tamil population, and say look, these are fabrications. We are genuine about how to search for reconciliation," he said.

Independent observers were largely excluded from the conflict zone during the war in Sri Lanka. Even today, access remains tightly restricted. Critics and some human rights groups discount the government's assertion that it was not involved in the killings.

The Sri Lankan military defeated the Tamil Tigers this year. The rebel group, formally known as the Liberation Tigers of Tamil Eelam, had been seeking an independent state for minority Tamils in Sri Lanka. At least 70,000 people were killed in the decades-long conflict.