WASHINGTON (CNN) -- The parent company of a security contractor said Thursday it is "fully cooperating" in the investigation of allegations that the contractor allowed mistreatment, sexual activity and intimidation within the ranks of private guards hired to protect the U.S. Embassy in Afghanistan. 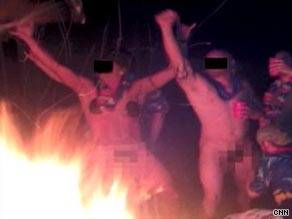 A spokeswoman for a watchdog group says hazing at a camp for security guards went "well beyond partying."

The allegations came to light earlier this week when the watchdog group Project On Government Oversight sent a letter to Secretary of State Hillary Clinton and briefed reporters on its findings, which it said were based on e-mails and interviews with more than a dozen guards who have worked at the U.S. compound in Kabul.

The company, ArmorGroup, North America, has a security contract with the State Department to provide services through July 2010.

Wackenhut Services Inc., the corporate parent of ArmorGroup, e-mailed a statement on Thursday in response to questions about ArmorGroup's private guards in Kabul.

"Our contract with the Department of State requires us to refer all questions to the Department of State, director of public affairs. We are fully cooperating with the DOS in the investigation of the recent incidents referred to in the letter from" Project On Government Oversight, said the statement, sent by Wackenhut Services spokeswoman Susan Pitcher.

On Wednesday, the U.S. Embassy said it was taking the allegations very seriously.

"Nothing is more important to us than the safety and security of all Embassy personnel -- Americans and Afghan -- and respect for the cultural and religious values of all Afghans," the embassy said. "We have taken immediate steps to review all local guard force policies and procedures and have taken all possible measures to ensure our security is sound."

She said that ranking supervisors were "facilitating this kind of deviant hazing and humiliation, and requiring people to do things that made them feel really disgusted."

In the letter Project On Government Oversight sent to Clinton, Brian wrote that the problems are "posing a significant threat to the security of the embassy and its personnel."

Among the recommendations from the group: immediate military supervision of the private security guards, a review of whether the contract should be revoked and consideration as to whether government forces should replace private security in a combat zone.