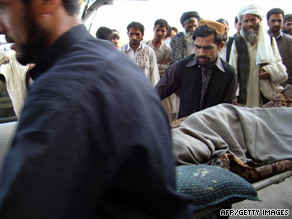 Capt. Elizabeth Mathias of NATO's International Security Assistance Force, also known as ISAF, said the military believed there were no civilians near the trucks at the time of the attack.

NATO learned afterward that was not the case. "Based on what we know, there were civilians there," Mathias said.

Local Afghan officials were quoted as saying in some news reports that nearly half the people killed in the airstrike were civilians who rushed the fuel trucks. Mathias declined to confirm those numbers.

Investigators are trying to determine who was at the site and whether a mistake was made, Mathias said. She said a local NATO team is already in Kunduz province conducting an investigation with Afghan forces and another team from the central office is on its way.