Search on for trapped Indonesians

CIANJUR, Indonesia (CNN) -- Roads blocked by earthquake debris were cleared enough Friday to allow the addition of heavy machinery for the first time in the search for dozens of people trapped under rubble. 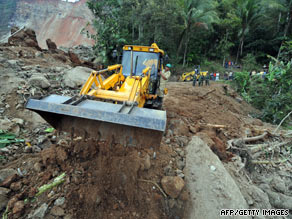 Indonesian rescuers use heavy machinery in the search effort in Cianjur in West Java on Thursday.

Those trapped in Cianjur, on the island of Java, have showed no signs of life since the 7.0-magnitude quake shook the region Wednesday. A landslide buried at least 11 homes in Cianjur.

The quake killed at least 64 people and injured more than 400, according to the National Disaster Coordinating Agency.

There was no immediate need for foreign assistance, he said.

"Until now, the Indonesian government is still able to handle it by itself using existing national resources," he said, according to Antara.

The 7.0-magnitude earthquake jolted the island on Wednesday shortly before 3 p.m. local time (4 a.m. ET). More than 400 people were injured.

Hear a report from the scene »

All About Indonesia • Natural Disasters • Earthquakes