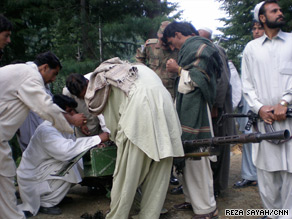 Zaid is among hundreds of villagers in northwest Pakistan who've volunteered to join private militias, called lashkars. These groups have vowed to help Pakistan's military in fighting the Taliban.

"I'm doing it for peace," Zaid said, right before he fired several shots in the air with his rifle.

Pakistani military officials credit the lashkars with helping chase the Taliban out of Swat Valley and neighboring districts once infested with the militants.

"By nature, they're very tough," Pakistani army Major Hasnain Shah said of the lashkars. "They're sacrificing their lives just to protect their own values and to help us out."

One group, called the Soltan Kheil lashkar, is made up of 500 armed men from the district of Lower Dir. Group members say they protect their villages against Taliban fighters in bordering Swat Valley.

After a two-hour drive and another 30-minute climb in some of the most magnificent mountains in the world, we reach the lashkar's base.

The mountaintop meeting offers a rare look at the militias.

The men have rugged faces and chapped hands weathered by scorching summers and arctic winters.

Many have rifles strapped across their shoulders. These men are fierce warriors but fiercely loyal too. Reach out your hand and you'll get an embrace in return.

This is a rare opportunity to get to know Pakistani tribesman who otherwise live in isolation from the international media. I ask them what they like most about America.

"It's a democracy," said one of the lashkar members.

I ask them what they dislike most about America.

"They're cruel to the Muslims," answered one man. "They interfere with other countries."

"They promote peace within their borders," said another man. "But they're against peace in other countries."

Becky Anderson takes a look at the Pakistani militia
2000 GMT

The Soltan Kheil lashkar's headquarters is perched high atop a mountain range. Swat Valley sits to the east, where the Taliban once destroyed music shops, burned girls schools and beheaded enemies in public squares, and Lower Dir sits to the west.

If Taliban fighters come near, a World War II Russian-made heavy machine gun awaits them. The old beast of a weapon can take down a chopper more than a mile away.

"This is the main passing point," said Malik Zaib Khan, the leader of the lashkar. "If we left it open, the Taliban can easily go back and forth."

The group test-fires the weapon. It shakes the ground. If the lashkar needs more ammunition, the Pakistani military usually provides it. Military officials say they strategize with militia leaders and provide food and medical care for them.

The fighters go without pay and without their families.

Aziz ul Rehman said he has not seen his four daughters and two wives in a month. "We're trying to stop the Taliban and establish peace," he said.

The lashkars have killed and arrested dozens of Taliban fighters, said military officials, who noted the arrests of four Taliban commanders from Upper Dir.

"We hate the Taliban," lashkar leader Khan said. "We hate them a lot. I say it openly."

Zaid says he hasn't killed any Taliban fighters during his summer job yet.

But the teen's finger is on the trigger.