U.S. says it's ready for direct talks with North Korea

WASHINGTON (CNN) -- In a dramatic policy shift, the Obama administration Friday said it is willing to engage directly with North Korea as a way to bring the reclusive regime back to six-nation talks aimed at ending its nuclear ambitions. 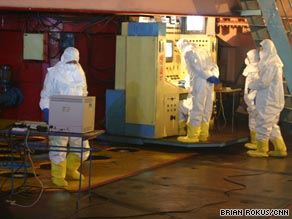 North Korea pulled out of the six-party talks in April, protesting condemnation at the United Nations over its nuclear test and missile launches.

Crowley said the goal of direct talks would be "to encourage the North to come back to the six-party process" and take "affirmative steps towards denuclearization."

Until now, the United States has said it would hold bilateral talks with North Korea only within the framework of the six-party negotiations, which also include South Korea, Japan, China and Russia.

While continuing to reject the six-party talks, Pyongyang, the North Korean capital, has recently signaled its willingness to re-engage with the United States directly and even invited the Obama administration's special envoy for North Korea, Stephen Bosworth, to visit.

The North Korean regime also has made some conciliatory moves in recent weeks, including freeing two American journalists and five South Korean citizens. North Korea also restarted talks with South Korea on reunification of families divided by the Korean War and normalized traffic along the border with South Korea.

The new strategy to engage in direct talks with Pyongyang emerged after Bosworth returned from talks in Asia with Chinese, Japanese, Russian and South Korean officials.

"We believe we have support" from the other nations "to have bilateral discussions, if appropriate, as a means of bringing North Korea back to the six-party process," Crowley said.

Senior State Department officials said such talks probably would be led by Bosworth and probably would not begin before Secretary of State Hillary Clinton meets her six-party talks counterparts in New York later this month at the U.N. General Assembly, where they are expected to discuss a strategy for moving ahead with North Korea.

All About North Korea • South Korea • U.S. Department of State