SHAOSHAN, China (CNN) -- "Mao is very great and famous, and he saved the whole of China," exclaims an 18-year-old woman from Wuhan in Hubei province. "Both young people and old people love Mao very much!" 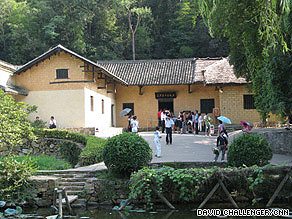 Mao was born in his family house in 1893. The rooms are preserved with original furnishings.

The woman is accompanying her 75-year-old grandfather to Mao Zedong's birth town of Shaoshan in Hunan province, about 100 kilometers (62 miles) from the capital Changsha -- and the juxtaposition is as intriguing as it is telling: A woman born after the Tiananmen Square crackdown and a grandfather born during the Long March, joined in a pilgrimage to celebrate the founder of the 60-year-old Chinese republic.

"Great Leader," "Great Teacher," "Great Helmsman" -- the monikers for Mao may be numerous, but he alone still serves as the Chinese Communist Party's premier brand, and anyone who visits Shaoshan can still see the power of his personality cult.

The village consists of numerous Mao landmarks, and it's his house where the huge numbers of tour buses usually converge first.

Born here in 1893, Mao first lived in a large thatched-roof abode surrounded by pretty gardens and a small lake. Visitors tightly snake through the impeccably preserved rooms, marveling at the kitchen utensils and original beds that Mao and his family slept in.

There are detailed plaques throughout, outlining the family's early years and brief descriptions of his two brothers -- both of whom were killed in warfare.

Nearby is the Museum of Comrade Mao, which displays exhibits and old Communist Party photos. While visitors get a sense of the republic's history, there are glaring omissions. While Mao the heroic revolutionary is celebrated at every step, there's nothing on either the Great Leap Forward or the Cultural Revolution -- campaigns that cost the lives of tens of millions and caused massive social and political upheaval. (See Fact Boxes, left).

Great Leap Forward (1958-60): Mao attempts to galvanize Chinese agriculture and raise steel production through collectivization. The result is utter economic disaster. A famine ensues, resulting in the deaths of as many as 40 million Chinese.

Cultural Revolution (1966-76): Mao instigates a dramatic purge to rid the Chinese Communist Party of "capitalist roaders." Communist leaders at all levels are arrested; many die. Countless others are killed as parts of the country descend into factional warfare and student Red Guards run amok.

"Yes, Mao made some mistakes," one tourist says as he studies a photo of famous revolutionary Liu Shaoqi, himself a victim of the Cultural Revolution. "But it was for the common good. Without mistakes, how does one learn?"

About 500 meters up from Mao's house, a large bronze statue of the former leader towers over a massive square, where admirers energetically bow and pay their respects. After their backs can take no more, it's back on to the bus for the last major tour stop, Dripping Water Cave.

Mao lived in this comfortable retreat briefly in 1966, swam in its nearby reservoir and "revised the political state of the world," according to one sign posted outside his bedroom. Visitors can view where the aging revolutionary slept, the sofas he sat on during important meetings, as well as his bathrooms.

The path that winds back down to the main road is filled with touts, their stalls full of miniature Mao busts, caps, key rings, copies of his obligatory Little Red Book and other paraphernalia. You can even have your photo taken and enhanced digitally with Mao smoking a cigarette, or shaking his hand.

A buzz surrounds the stalls; business is good. Though visits to Shaoshan dropped off in the 1980s following a more subdued government review of Mao's legacy, tourism is again vibrant.

"Mao is the father of modern China, but he did make some mistakes," explains a tour guide. "As the government said after his death, Mao was '70 percent right, 30 percent wrong.' So fewer visitors came during that period ... but numbers are now back to about 3 million a year."

One of those three million enthusiastically examines the knickknacks that fill the stalls.

"My cousins back home will love this," beams the 18-year-old woman from Wuhan, as she holds up a T-shirt of Mao staring dotingly over the Chinese masses. "Everyone loves Mao!"